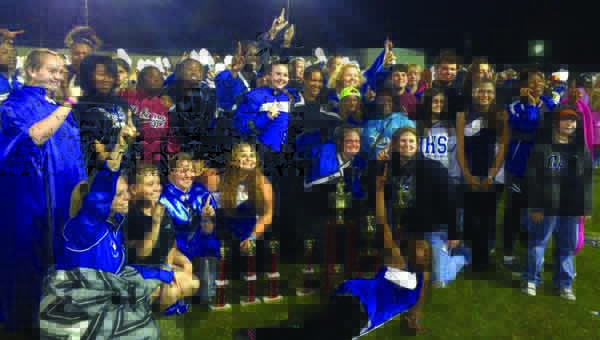 Ashley Catrett, director of curriculum for Crenshaw County Schools, said all of the county schools did well.

Catrett said all of the bands earned superior (1) or excellent (2) ratings in the competition.

“We had a lot to be proud of from all of our bands that day,” she said. “The bands did well and we had a great turnout from booster clubs and band parents.”

Judges scored each band by their maneuvers, marching fundamentals and sound techniques.

“We give out best in class for each class, band and all the categories; drum majors, color guard, majorettes, drums and dance line,” said Andalusia High School Band Director Bennie Shellhouse. “There’s a mayor award for the overall best band at the competition.”

Foley High School’s band took the Mayor’s Award and grand championship at Saturday’s A-Town Invitational band competition in Andalusia. As the only 5A to compete, Foley also took Best of Class.

Other Best of Class winners were: