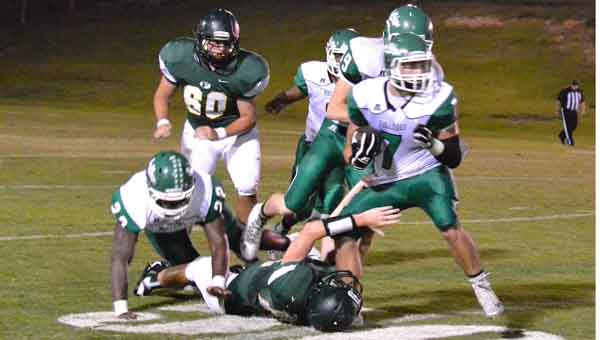 The Bulldogs were ahead 21-0 at the half, but slowly watched that lead slip away.

“We just really fell apart for lack of a better word,” Kilcrease said.

An onside kick ended up in the hands of Florala. When the Bulldogs got the ball back, they had a fumble that sent Florala back to the endzone.

“They were better than we thought they would be,” Kilcrease said of his opponents.

A couple of big plays got the team back on track. Sophomore quarterback Jacob Free threw a 45-yard touchdown pass, which was caught by Savion Jones.

Kilcrease said the team’s luck will run out if players continue digging themselves into a hole and relying on the big plays to pull them out.

“You can only get in a hole for so long before you find you can’t get out,” he said.

Brantley will travel to Barbour County this week. The team has not won a game this season, but Kilcrease said they were stronger than they looked and played tougher schools as a 3A team.

“They have a lot of speed and that could be a challenge for us,” he said.