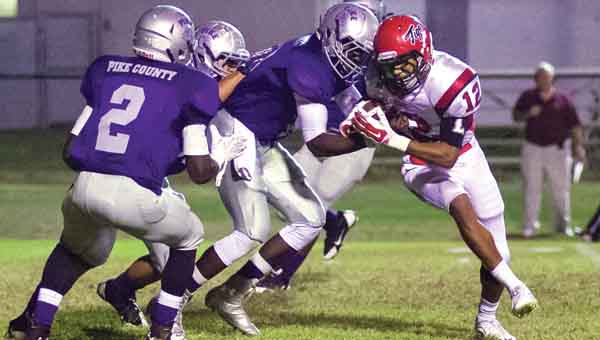 BRUNDIDGE – In a game characterized by its intensity, the Pike County Bulldogs rallied in the final 30 seconds of the fourth quarter to beat the Luverne Tigers 20-18.

Luverne head coach Mike Dubose has come to expect a nail-biter when the Tigers take on Pike County.

“A year ago, they were up on us and we took the win in the last few seconds of the game. This past Friday night, we turned it over and they took it down to the last play,” Dubose said. “It was sort of typical of our games. We knew they would be physical, and play with a lot of intensity and a lot of emotion.”

Luverne managed to get ahead early with a score in the first quarter, but the PAT was no good. The Bulldogs’ defense kept the Tigers on their toes with hard hits across the board, and the Bulldogs retaliated with a score of their own with just 50 seconds left in the half.

“It means a lot to go into a game like that and come out with the win,” Holland said. “We made a couple of big plays. I think our score before half was big.”

The Tigers came back after the half ready to play, pushing the score to 12-6 with just under four minutes left in the third quarter.

The Bulldogs came back to tie the game up less than a minute later. The Bulldogs went for a two-point conversion but it was no good. The Tigers scored again with seven minutes left in the quarter, and after several turnovers and incomplete passes it looked like the Dogs were out of the fight.

But the dogs were able to fight after a fumble recovery. The Bulldogs drove the ball into the end zone to tie the game up with 32 seconds left in the game.

“We didn’t protect the ball with both hands,” said Dubose. “I felt like if we could hold onto the ball, we could stay ahead. But, I’ve got to give them credit for stripping it from us.”

Instead of going for just the PAT, the Bulldogs went for the two-point conversion and Holland said it was something the team had been working on since the summer.

“I felt like they would be really going after it,” Holland said. “I knew that if we went for it then they could block it, and that could put them right back in the game. I felt like it was something that we need. It comes back from 7-on-7 during the summer. We did it a lot. We failed almost every time, but it was a good stepping-stone for us in that situation. The guys relished the moment of just being able to do it.”

Dubose said the team has been a very poor first-half team up to this point, which is something he hoped to change.