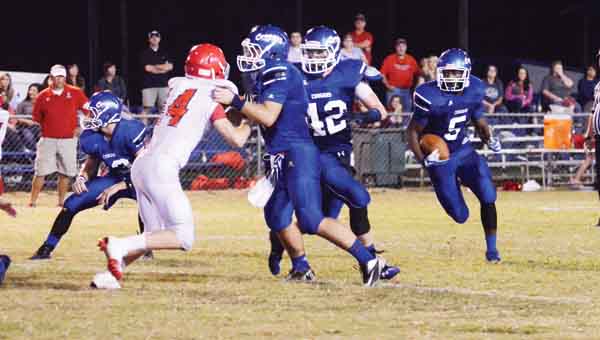 Friday’s defeat over Abbeville Christian may have upset a top-seed, but head coach Greg Gibson says it was not the best his team could play.

“We’ve still got our best game in us,” he said. “I can’t say played well with three interceptions and a fumble, but we played hard.”

The fumble came at the top of the first quarter. It was in the Cougar end zone and was quickly recovered by Abbeville. The Generals scored again before CCA gained control of the game.

“We were down 15-0 early in the game and had to dig ourselves out of that hole,” Gibson said. “The team just kept playing.”

The Cougars turned things around with Jamal Sanders’ 43-yard rushing touchdown. Collin Holloway was another one of many success stories Friday night. The junior had an interception and 10 tackles for the night.

Dalton Weeks was the leading rusher, carrying the ball 45 yards. Gibson said many of the wide receivers averaged in the 35- to 40-yard range, qualifying the win as a true team effort.

Quarterback Colten Kelley was 11 for 18 passes for 123 yards. He threw two touchdowns and one 2-point conversion.

Gibson said the team did a good job of running the clock, opting to run the ball instead of pass it. The team had five turnovers but managed a 22-15 win over Abbeville.

Up to Friday’s loss, Abbeville was undefeated in its region. The team now stands at 3-1.

“If they’d won Friday, they would’ve been region champs,” Gibson said. “This win was a big deal. It put us in the drivers seat.”

Ashford is 0-3 in the region, but Gibson is not discounting the team.

“They’re a really big football team,” he said. “If you look at them on film, you’ll see they are the biggest team we’ll face and they’ve knocked every team around that they’ve played.”