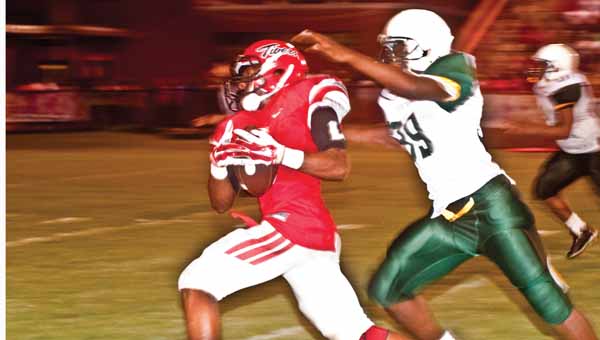 LUVERNE JOURNAL PHOTO | MONA MOORE
Ke’Vontae May makes dodges a Lion as he picks up a few yards for LHS.

Central Hayneville players were falling like flies by the end of Friday’s game with Luverne. Thankfully, it was nothing serious, said LHS head coach Mike Dubose.

“Those were just cramps on the other side. We had a few ourselves,” he said.

The Tigers walked away with a win, but it was not the kind of win Dubose liked to see.

“We were very, very fortunate to win,” he said after the game. “Central out-coached us, out-played us and they deserved a lot better than they got. We’ve got to get a lot better.”

Quarterback Kenterius Womack made 7 of 18 passes with two interceptions. He gained 128 yards passing.

It’s been two weeks since the Pike County Bulldogs have seen football action, but head coach Fred Holland expects the team to get back to business when the host the Luverne Tigers tonight.

“Overall I think our guys really enjoyed the time off,” Holland said. “We utilized it to help us get ready for our upcoming game. We’re basically in the middle of the season and I felt like the work we did was very productive.”

Apart from a loss to the Dale County Warriors the Bulldogs have looked the part to match their top 10 ranking in Class 3A Region 2, and are still very much in contention for post-season play.

Despite a 2-3 record the Tigers are still a dangerous opponent for Pike County, and after falling by one point to the same Goshen Eagles team that gave the Bulldogs fits earlier in the year they have won two straight.

“They have an exciting team,” Holland said. “They throw the ball a lot and they have a lot of skill players. It’s very seldom that you see a team in (Class) 2A with as many players as they have that only play one way. That’s very impressive to me.”

The matchup between coaches will be almost as intriguing as between the players, pitting Holland and his decades as a part of the winning tradition at Pike County against Mike Dubose, who is better known for his time spent leading the Alabama Crimson Tide in the late 1990s.

“He does a great job developing his players,” Holland said. “He has a great mind for the game. I coached against him last year, his players are smart and they play hard for him. He really understands his players, and they do a lot of good things.”

The high-profile history of Dubose shouldn’t take away from his time spent at Luverne, and just last year his team finished with an 11-2 record.

The Bulldogs traveled to Luverne last year and lost a tight game 21-20 to the talented Tigers, who did not lose a home game all last season.

The Tigers are still a talented bunch this season with athletes to spare, which has helped fuel the offense to a respectable 22.2 points a game.

The defense hasn’t been as sharp as the offense thus far, but has improved significantly from the team that allowed back-to-back performances of over 30 points to begin the season.

Although this game won’t have much impact on whether or not Pike County will make the playoffs it could be an important step as they will spend the first four weeks of October in the thick of regional play.

“I don’t like to look over anybody,” Holland said. “The Luverne game is a very big game for us, and I feel like going in and winning this game can really help us get ready for the conference games we will have over the next couple of weeks.”

Kickoff is 7 p.m. at Bulldog Stadium in Brundidge.