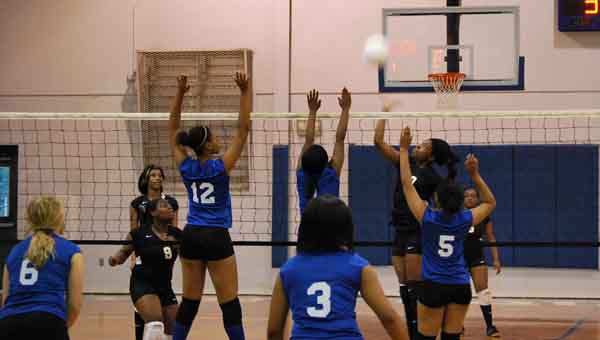 The Highland Home Lady Squadron volleyball team will travel to Brantley today for a match against the Lady Bulldogs.

“To beat Brantley, we need to work together as a team, hustle, stay focused and cover our areas on the court,” said HHS junior Toni Edwards.

So far, the team is 5-2 with both losses to Goshen.

“We have improved a lot since our first game against Luverne,” she said. “We have to stay focused and continue to work hard, communicate and play within our roles on the court.”

So far, June has consistently delivered, according to head coach Jacqueline Tate. She said Senior LaSheka Sankey has also been a great asset for the Lady Squadron.

Tate also noted her team’s improvement since the start of the season. “We’re talking more and communicating and basically just starting to try and trust each other on the court more and as a result, we’re getting results,” she said.

Individual players have made great strides. Tate said the greatest improvements have come from seniors Sara Richards and Shayla Allen.

“They’re getting better at playing within their roles this season,” she said.

Today’s junior varsity game in Brantley starts at 4 p.m. and varsity will follow.