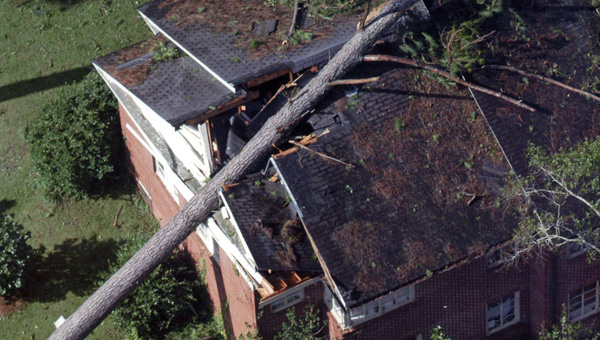 A home on Overlook Road in Greenville took a direct hit from a tree that was ripped from the ground by Hurrican Ivan. It’s been 10 years since Ivan unleashed its fury on the Gulf Coast. (File Photo)

Memories are fresh for some local residents 10 years after Hurricane Ivan wreaked havoc on the Gulf Coast.

On Sept. 16, Hurricane Ivan, a Category 3 storm, made its first U.S. landfall on Sept. 16 just west of Gulf Shores, Ala.

“I was on Bell Street, and there were downed trees and branches everywhere,” Robert Mello said. “I went to the fire department then the police department to volunteer with a couple of friends, and was told to go home. We couldn’t help clean the streets because of liability. My friends and I took our axes and cleared our streets anyway.”

Most of the roads in Greenville were impassable due to fallen trees.

Lisa Halford Bush remembers her family having to cut their way out of Forest Drive.

“Trees were down at both ends of the road and we had to cut our way out,” she said. “I owned Bush’s Country Store on Hwy. 10 West. I opened the store and we used generators for the gas pumps. There were cars backed almost to the Interstate trying to get gas. The whole family was there pumping gas for people.”

Cambrian Ridge, one of Butler County’s biggest tourist draws, lost more than 800 trees in the storm.

At Sherling Lake Park, where many of those who fled the Gulf Coast in RVs had take refuge, trees and limbs littered the park. RVs and pavilions at the park were damaged. Following the storm, the park remained closed for months.

In the wake of the storm, some homes went weeks without power and water.

“I remember cold showers and cooking on the grill before the meat in the freezer would spoil, and how hard it was to entertain two children with no electricity,” said Harriett Foshee.

Christopher Leland Cobb remembers being one of the lucky few to have power restored relatively quickly.

“I lived with my parents on McKenzie Street,” he said. “When it came through I sat on the porch and watched the winds. … Our power was among the first to be restored so all the family came over for coffee.”

Dawn Marie McCord has a living reminder of the Hurricane Ivan.

“I was due for inducement that day with my daughter Raina, but my doctor called and told me that he wanted to wait until after the storm,” she said. “Then he mentioned that a lot of women go into labor during hurricanes. I was frightened, and extremely uncomfortable in the heat. However, it was nice to be go into the hospital the following Sunday — in the air conditioning — since our home did not have power for the next week. Good times. Raina will be 10 this coming Saturday. Time sure flies.”

Hurricane Ivan was the most destructive hurricane to affect this area in more than 100 years.

In Alabama, the Federal Emergency Management Agency (FEMA) more than $190 million in grants to more than 89,200 applicants through the Individuals and Households Program for lodging expenses, rental assistance, minor home repairs and other needs assistance, and more than $222 million for emergency protective measures, or for the repair or replacement of public infrastructure and public utilities.