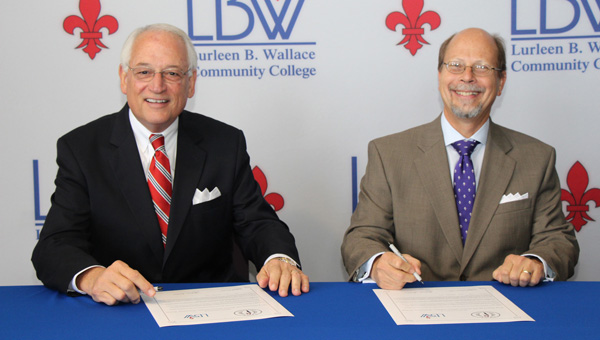 Troy University Chancellor Dr. Jack Hawkins Jr., left, and Lurleen B. Wallace Community College President Dr. Herbert Riedel sign a reverse transfer agreement between the two institutions that allows students who have transferred to Troy from LBWCC to be awarded an associate degree while working toward completing a bachelor’s degree. (Courtesy Photo)

Troy University and Lurleen B. Wallace Community College officials signed an agreement Monday that would enable transfer students to complete their associate degree while pursuing their bachelor’s degree.

The reverse transfer agreement permits former LBW students who transfer to Troy University to transfer eligible credits back to LBW for the purpose of attaining an associate degree. Students qualified for reverse transfer will have earned at least 15 semester credit hours from LBW, will have earned at least three semester credit hours from Troy University, and will be in good standing at both institutions.

“What we are doing will help counter one of those shortcomings in Alabama,” Hawkins said. “By any measure, we do not have too many educated people and often the barometer for the measure is found in degrees. I think as we recognize the academic work whether (at LBW) or at Troy, but it culminates in a credential. That’s important. It adds so much to the individual’s resume and their preparation.

“It’s good public policy and that’s where we have got to keep our sights: not on individual interests, not on institutional interests, but on what’s in the best interest of the State of Alabama. This is a step in that direction. I would predict that because this is the logical thing to do, probably public policy will be changed in the future so that students from all Alabama’s two-year colleges will have this same benefit from all the universities in the state.”

Dr. Herbert Riedel, president of LBW, said the agreement was a sign of the commitment both LBW and the Troy had to better serving students.

“We provide unsurpassed value in terms of the education that our students receive,” Riedel said. “Equally as important as partnering with K-12 is for the two-year colleges to partner with the universities. This agreement is an indicator of a closer working relationship with Troy that directly benefits our students.”

This agreement is the second of several such partnerships for both Troy and LBW. A future agreement signing is planned for Troy with Wallace Community College in Dothan. Troy’s first agreement was signed earlier this month with Southern Union Community College, while LBW signed a partnership agreement with Auburn University Montgomery in January that included reverse transfer.