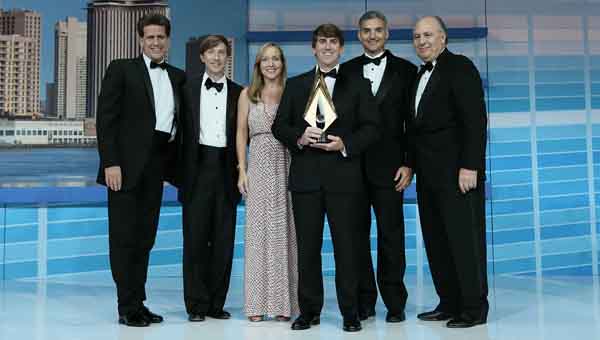 NEW ORLEANS – As part of a special recognition ceremony during its national bottler meeting here, PepsiCo Americas Beverages (PAB), a business sector of PepsiCo (PEP: NYSE), last night named the Pepsi-Cola Bottling Company of Luverne, Alabama, its Donald M. Kendall Bottler of the Year for 2013.
Named for PepsiCo’s beloved former chairman and chief executive officer, the Donald M. Kendall Bottler of the Year Award was created in 1994 to honor the very best of the best among Pepsi-Cola bottlers in the United States and Canada.  Nominated for the third time in the past four years, Pepsi Luverne was one of three finalists recognized for outstanding franchise performance, including customer service, retail and foodservice execution, quality and community support.
The award was presented to Pepsi Luverne President and CEO Greg Crouch by PAB CEO Al Carey and Mario Mercurio, senior vice president and general manager of PAB’s Franchise Business Unit.
“We define our success in terms of an unfailing commitment to our community, our customers and our people,” said Greg Crouch, president and CEO of Pepsi Luverne. “It’s an incredible honor to have been nominated in three of the last four years, and it feels even better that our perseverance has paid off.”  Noting that 2015 will be Pepsi Luverne’s 100th anniversary, Crouch added, “I can’t think of a better way to kick off the celebration.”
“Pepsi’s independent bottling partners are an outstanding group,” said Mercurio.  “In the past year, no one franchise has stood out more adeptly than Greg and his Pepsi Luverne team.  They’re intelligent, tenacious and quick on their feet, providing unparalleled customer service, methodically attacking opportunities to grow the business and give back to their community.”
Also honored as Donald M. Kendall Bottler of the Year finalists were Blue Rock Products of Sidney, Montana, and LinPepCo’s Siouxland franchise, which serves parts of Iowa, Nebraska and South Dakota.