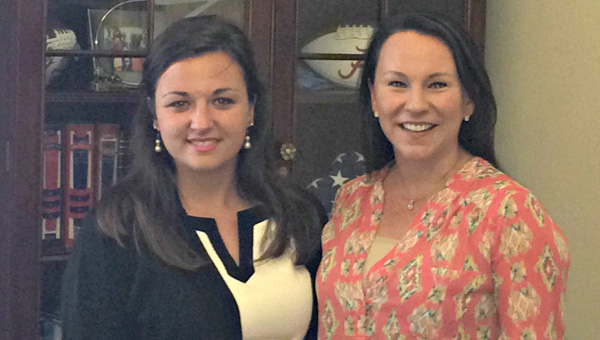 Fort Dale Academy senior Holland Steadham was one of 40 students from across the nation to participate in the University of Mississippi Trent Lott Leadership Institute this summer.

The program selected forty upcoming high school seniors from across the nation to attend four weeks of college courses focused on political science and speech. The program, which provides students with six hours of college credit, concludes with a trip to Washington, D.C.

While in Washington, D.C., Steadham had the opportunity to meet Rep. Martha Roby.

“Being a part of this program and visiting our nation’s capital was such a rewarding opportunity,” Steadham said. “It was such an honor to meet Rep. Martha Roby. She is one of my greatest role models and is an inspiration to other women in Alabama hoping to become involved in public service.

Along with meeting a number of public officials, the students also met professionals from companies like Google and American Airlines and got a firsthand look at government procedure, which they studied as part of the program.

The program also offered Steadham and the other participants a chance to give back.

After four weeks, the group of students traveled to Washington, D.C., and volunteered at So Others May Eat — a local soup kitchen.

“Once we got there, all that was there were veterans,” said Steadham. “Seeing these people made me realize that it could have been any of us in need and that we take so many things for granted.”

This experience led Steadham to found Experiencing Community by Helping Others at Fort Dale Academy.

The club is open to sophomores through seniors and is focused on community service.

“I am just now starting the club this year,” Steadham said. “But if we are allowed to, I am planning to have a benefit for some of the DHR families who take in foster children, and also find needy families around the community and cook a Thanksgiving meal for them.”

“The Trent Lott Leadership Institute is a wonderful opportunity for students to learn how our government works,” Roby said. “I am so pleased to see young Alabamians like Holland getting involved in public service early on. She is a talented young woman, and I wish her all the best in her future endeavors.”

Steadham said she plans to attend the University of Mississippi after graduating from Fort Dale.

Steadham is the daughter of Ronnie and Stephanie Steadham.