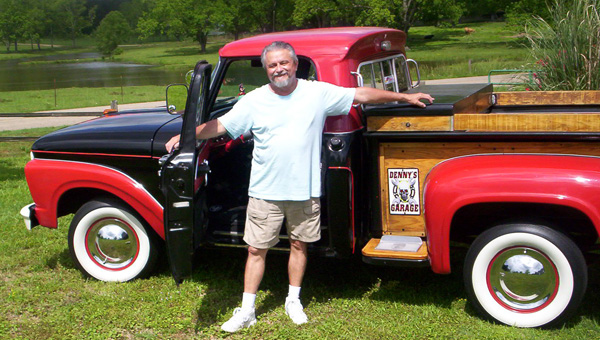 Denny Lambert poses with his 1965 Ford F-100. The pickup is one of a handful of classic vehicles, including a 1939 Chevrolet pickup and a 1977 Corvette, that Lambert considers his “toys.” (Courtesy Photos)

Denny Lambert is a car guy.

He has been for as long as he can remember.

It doesn’t matter if it’s a Ford or Chevrolet, a pickup or sports car, if it has an engine and four wheels, Lambert is a fan.

“I have always had an admiration for American cars,” Lambert said. “When I was younger I had a 1965 Chevy Impala SS that I sold before I went to Vietnam. When I got back, I had a 1972 Dodge Challenger. My dad and I got a 1949 Dodge that we restored. I wish I had kept all of those cars.”

While those cars may have driven out of Lambert’s life, he’s managed to find a few others to help fill the void.

Lambert, who is now retired, spends much of his time working on his collection of classic vehicles.

“I spend most of my day outside puttering with one of my toys,” he said. “I may see something I want to change or add. It takes a lot of time keeping them clean. All four toys are kept under a shed or in my garage.”

At the moment, the 1939 Chevrolet is taking up most of Lambert’s time.

“I just got some metallic gold paint to paint the fenders,” he said. “I’m going to leave rest of body black. I like contrast on certain vehicles.”

Lambert’s F-100 is two-tone, and it tends to grab attention whenever he drives it around town.

“I receive so many compliments when I have it out,” he said. “Probably most people’s favorite is the 1965 F-100. So many people say my dad had one like that, or I sold one like that. Many like to take pictures of it.”

Lambert found the truck in Luverne. While all the parts for the truck were there, Lambert said it was in need of plenty of TLC and elbow grease.

“Every body part was rusty,” he said.

Lambert redid the interior, added oak trim and wood rail to the outside of the bed and outfitted the truck with wide whitewall tires.

“I could spend hours talking about all of the little things I’ve done,” he said. “I like to call my cars and trucks refurbished instead of restored. I’m not a professional and cannot call my vehicles concourse correct.”

While the F-100 may be a crowd favorite, it’s the 1977 Corvette that has captured Lambert’s heart.

“It’s the kind of car you wanted as a kid, but couldn’t afford,” Lambert said with a big grin. “That car is my baby.”

Lambert said the Corvette was purchased locally and more or less just needed a good cleaning.

“It was restored with a frame up restoration,” he said “It had an all new engine and transmission and really just needed some cleaning up and new tires.”

Lambert did hand stich a steering wheel cover and add black seat covers with a red insert to match the car’s red paint.

When Lambert’s not tinkering with his toys, he’s out of the highway listening to their engines roar as he presses down on the accelerator.

“I drive them all,” he said. “Why have them if you aren’t going to take them out and drive them.”

Lambert plans to attend Saturday’s car show at the Edge Theatre. The show is hosted by LifeLine Church. There will be a ride in from 8 a.m. to 10 a.m.

Lambert said he took the F-100 to last year’s event, and it was met with rave reviews.

“It was a work in progress, but it drew a crowd,” Lambert said.