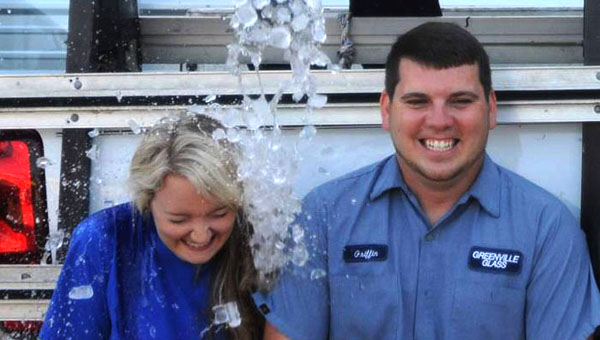 Lacy and Griffin Huggins, along with staff members from Greenville Glass Co., took the ice bucket challenge on Monday in memory of Lacy’s mother, Lisa Gray, who lost her battle with ALS in 2011. (Advocate Staff/Tracy Salter)

For some the ALS ice bucket challenge is a fun way to support a worthy cause.

For others it’s a social media phenomenon.

Huggins lost her mother to amyotrophic lateral sclerosis (ALS) in October of 2011 after a three-year battle with the disease commonly known as Lou Gehrig’s disease.

“Mom was officially diagnosed with ALS in July 2011 after several doctor visits through the course of three years,” said Huggins.

ALS is a progressive neurodegenerative disease that affects nerve cells in the brain and the spinal cord.

The progressive degeneration of the motor neurons in ALS eventually leads to the person’s death, according to the ALS Association.

There is no known cause or cure for ALS.

And that’s the driving force behind the ice bucket challenge.

Participants are asked to donate $10 if they elect to have a bucket of ice water dumped over their heads and $100 if they choose to avoid the icy shower. The money is used to help raise money to fund research for a cure for the disease.

Everyone from former President George W. Bush to comedian Tyler Perry to New York Yankee shortstop Derek Jeter has taken the ice bucket challenge. But it’s not limited to celebrities. A number of Butler County residents, such as Huggins, her husband Griffin, and the staff at Greenville Glass Co., have also taken the plunge.

“It was breathtaking,” Huggins said.

Huggins said the support from the community has also been overwhelming.

“We are so excited to see the awareness being raised for a disease that is so near and dear to our hearts,” she said. “It is time for ALS to get the spotlight that it so well deserves. … It means a lot to me because I know that it’s more than a challenge. I appreciate the cooperation from the guys at Greenville Glass. They’re real team players. We have been overwhelmed with the amount of support and participation with the ALS ice bucket challenges. Hopefully people now know that ALS is more than just an unknown acronym; it is a deadly disease that can affect anyone. We are so thankful to our friends, family, and community for stepping up and accepting the challenges as well as donating in memory of our mother, Lisa Gray.  We thank you from the bottom of our hearts.”

Since July 29, the ice bucket challenge has raised nearly $80 million, according to the ALS Association. During that same period last year, the organization raised $2.5 million.