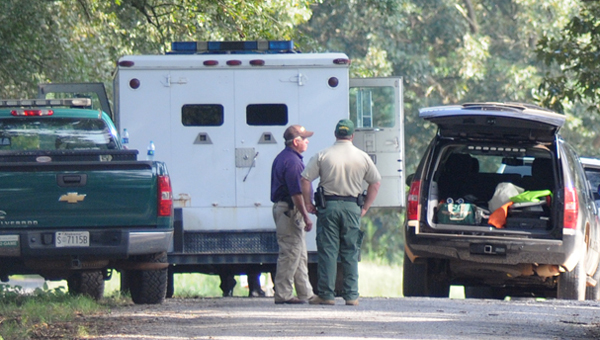 Butler County Sheriff Kenny Harden observes as a negotiator talks with a suspect who allegedly shot his wife early Tuesday morning before entering into an eight-hour standoff with authorities. (Advocate Staff/Andy Brown)

According to Butler County Sheriff Kenny Harden, Jonathan Wright shot his wife early Tuesday morning at their home in the Wildfork Community.

Harden said it is still unclear what triggered the incident.

“We got the call at 2:11 this morning that a subject had shot his wife,” Harden said. “The victim was asleep when she was shot, but she was able to walk to her parents’ house next door. They transported her to the hospital in Georgiana.”

Harden said the victim’s injuries are not life threating, according to the family.

Authorities, including the Greenville Police Department’s Special Response Team, made contact with the subject at about 3 a.m. and began negotiating the release of the child.

At 8:11 a.m. the child was released from the house. The subject remained in the house until just after 11 a.m., Harden said.

“It was a good ending to a bad situation,” Harden said. “The SRT team did a good job negotiating. It was a situation that could have gone sour, but I think we made the right approach and things turned out as well as they could have.”

Wright has been charged with attempted murder and domestic violence/assault, first degree.