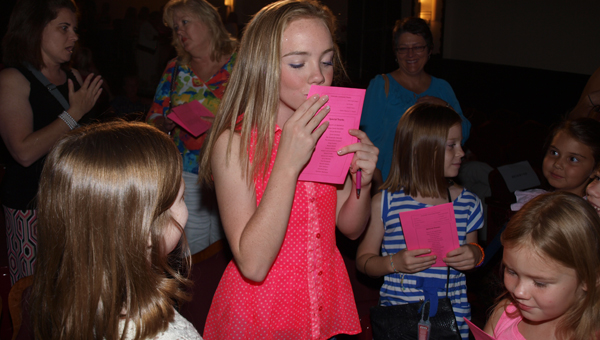 By Angie Long
The Greenville Advocate

From the hue of the production’s programs to the balloons that decked out the showcases outside the historic downtown theater, the Ritz was “in the pink” Friday night.

It was opening night for the Greenville Community Theatre’s summer show, “Pinkalicious: The Musical.”

Pinkalicious Pinkerton, played by Abbie Salter, adores all things pink — pink cupcakes in particular — and she always wants just one more. One day, the girl wakes up to discover she’s now pink from her braids to her Keds, just as she’s always dreamed of being.

Only turning into the personification of pink might not be as wonderful as she had expected — especially when her concerned parents, played by Mallory Schofield and Norman Wayne Schmitz, haul her off to Doctor Wink, played by Emma Jo Thomas, who confirms a case of pinktitis, and prescribes a diet of green foods.

Best friend Alison, portayed by Alexis Blackmon, falls out with her newly pinktastic BFF while little brother Peter, played by Roc Thigpen, is dealing with a secret — he loves pink, too. And so does Dad! What can they do?

Of course, this fractured fairy tale ends happily, with family and friends singing of the joys of pink and the color of love and happiness, a color that everyone can enjoy (although a little goes a long way). Oh, and green foods? They are actually quite tasty, as well as being good for you!

Filled with catchy tunes such as “You Get What You Get,” “I Got the Pink Blues” and “Pinktitis,” performed ably by the cast of 14 youngsters and young adults, “Pinkalicious” proved a potent crowd-pleaser, earning its stars a standing ovation and plenty of hugs and handshakes for the cast and crew.

No strangers to the Ritz stage themselves, co-directors Irina Seale and Lauren Seale proved themselves very capable of working behind the scenes to mount the show.

Proud grandmother Frances Seale, a member of the opening night audience, beamed over the success of the first GCT production primarily featuring the younger set.

“Wasn’t it a good show? Those kids were just great,” she said.

Anna Salter, mom to star of the show, Abbie, blinked back tears as she watched her daughter signing autographs (and placing lip prints) on programs for adoring young fans, as well as posing for photos with the little girls.

“I think Abbie is going to need an extra tube of lipstick tomorrow night,” said Abbie’s aunt, Lisa Huggins with a grin.

Based on a popular children’s book of the same name by Victoria and Elizabeth Kann, “Pinkalicious: The Musical” first became a hit on the New York stage before sweeping the nation with a funny, sweet story promoting positive messages for its audiences.