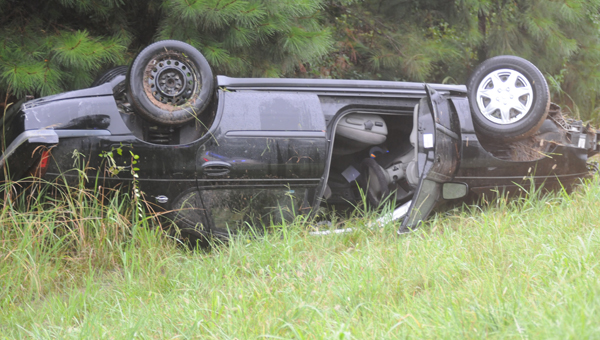 A man and woman accused of stealing a car and leading authorities on a chase have been take into custody. (Advocate Staff/Andy Brown)

Two people are in custody following a car chase and a manhunt Monday evening.

According to Harden, the pair stole a Chevrolet Malibu in Montgomery. The Montgomery Police Department gave chase until the suspects crossed over into Lowndes County on Interstate 65. At that point the Lowndes County Sheriff’s Office took over pursuit of the vehicle, which eventually left the roadway and overturned in the wood line near mile marker 140 in Butler County.

Chance was captured immediately after the crash, while Dutton fled into the woods. A K-9 unit from Atmore was called in to assist in tracking Dutton, who was captured in Porterfield Road.