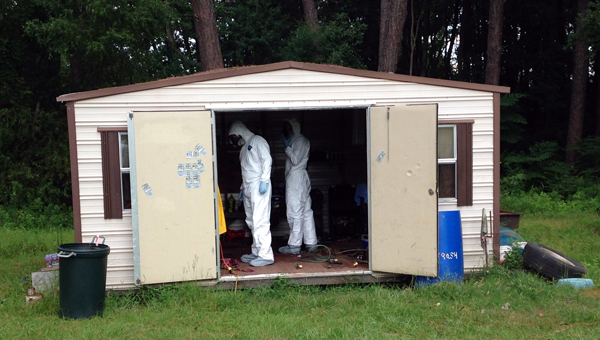 Officers with the Second Judicial Drug Task Force search a utility shed that was being used as a meth lab. The lab was found at a home on North Street in McKenzie. (Courtesy Photo)

Butler County Sheriff’s Office deputies went to a McKenzie home on Sunday to investigate a burglary and instead found a meth lab.

Butler County Sheriff Kenny Harden said while deputies were searching for a couple believed to be involved in a burglary, they noticed what appeared to be a meth lab on the North Street property.

“We got a call from a man about a burglary at his residence,” Harden said. “He had several thousand dollars taken and he suspected his daughter and her boyfriend may have been involved. When the deputies arrived at the daughter’s residence, they found the meth lab.”

After obtaining a search warrant, officers with the Second Judicial Drug Task Force searched the shed and found 18 grams of meth valued at approximately $1,800. 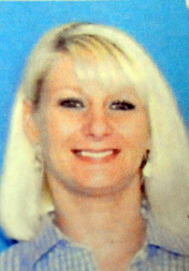 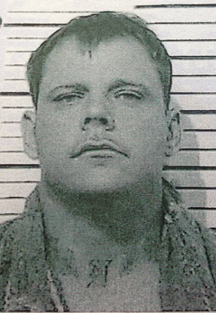 Both are wanted for possession of a controlled substance with intent to distribute and possession of drug paraphernalia, as well as questioning in connection with the burglary.

“We’re very proud of the drug task force and the work they do,” he said. “Meth is a dream killer. It kills people’s dreams. It kills their futures. Anytime we can get meth of the streets it makes our county a better place.”

District attorney Charlotte Tesmer said if convicted the couple faces a minimum of three years in prison as well as hefty fines.

Anyone with information on the whereabouts of Bush or Butler is asked to call the Butler County Sheriff’s Office at (334) 382-6521.

Harden said Butler should be considered armed and dangerous.

“From the information we have, he does carry a firearm,” Harden said.