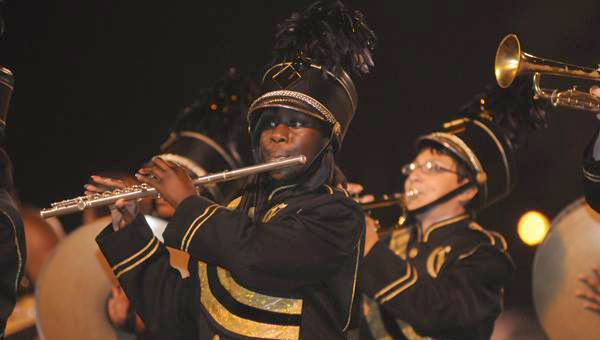 Members of Greenville High School’s Tiger Pride marching band perform during halftime of a game last season. This year, the band will be under the direction of Brett Johnson. The band’s halftime show will feature the music of R&B singer Bruno Mars. (File Photo)

Many bands in the south are known for their unique sounds.

“In the years to come, I plan for Greenville’s band to play in many bowl games,” said Johnson.

Johnson, a Prattville native, taught at Winder-Barrow Middle School and Winder-Barrow High School in Winder, Ga., for seven years after graduating from Troy University.  While at Troy he was a member of the Sound of the South marching band where he was the tuba section leader.

Johnson said he plans to grow the band at GHS by making frequent trips to Greenville Middle School to help build relationships with the students and get them involved with the band at an early age.

“I plan to expose these students to popular bowl games and with hard work and dedication, we can build our band to play in games like the Chic-Fila Bowl,” Johnson said.

Johnson and the GHS band are already hard at work. The band has been holding practices lasting about four hours, but Johnson said he’s tried to keep the practices fresh and fun.

Johnson believes the hard work is already paying off.

“I think that all of Greenville is in for a surprise for this year’s show,” said Johnson. “I’ve already enjoyed myself so much and I really like it here. This school is filled with such a great support staff and I’d like to thank (principal Joseph) Dean for playing such a huge part in the success that is soon to come to the GHS band.”

This season’s halftime show features the music of R&B singer Bruno Mars. Songs featured will be hits like “Run Away Baby,” “Locked Out of Heaven,” “Lazy Song,” and “Treasure.”

Johnson created a website for the parents and for student communications. It also features pictures and music links. For more information, visit this website at www.greenvillehighschoolbands.webs.com.