Cross-country trek ‘all about Gabe’ 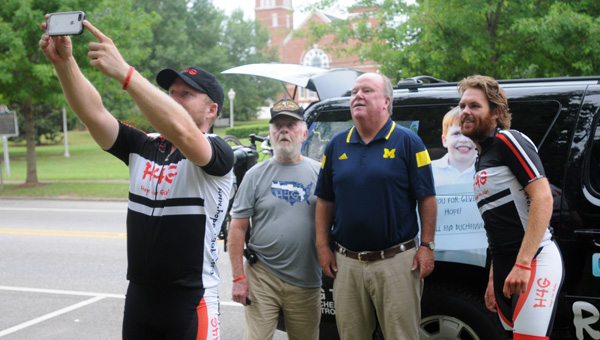 Gabe Griffin of Birmingham, Ala., turned 9 this year. This summer his parents are giving him the gift of a lifetime. Two cyclists are taking Gabe’s message of hope across America. Their goal is to try and raise enough awareness and donations to one day save Gabe’s life.

On Tuesday the team passed through Greenville on its way to Mobile where the 3,375-mile trek that began on the Pacific Coast will end.

The team is riding to raise awareness about a genetic mutation called Duchenne Muscular Dystrophy (DMD), which Gabe suffers from.

“Gabe and the other kids that suffer from this disease are what this is all about,” Staley said. “We want to educate people about what Duchenne is. If they don’t know what it is they can’t do anything about it.”

Duchenne is caused by an absence of dystrophin, a protein that helps keep the muscles intact. The onset of this fatal disorder occurs during early childhood and causes generalized weakness and muscle wasting that increases over time. While medical advances have led to some very promising clinical trials, to date there is no cure and no one has survived.

On Monday the Ride4Gabe team, along with Gabe Griffin himself, and his father, Scott, and mother, Traci, traveled to the Alabama State Capitol to meet with Gov. Robert Bentley to discuss ways that the government can be involved in Gabe’s fight to beat Duchenne.

“At 9 years old, Gabe walks, hugs, breathes and feeds himself like any other typical child that age,” Scott Griffin said. “If we don’t find a cure, that will be taken away in the next few years. We are ecstatic about the opportunity to meet with Gov. Bentley and other Alabama legislators and share Gabe’s story with them.”

The funds Staley and Bates raise will be put towards advancing DMD awareness and research.