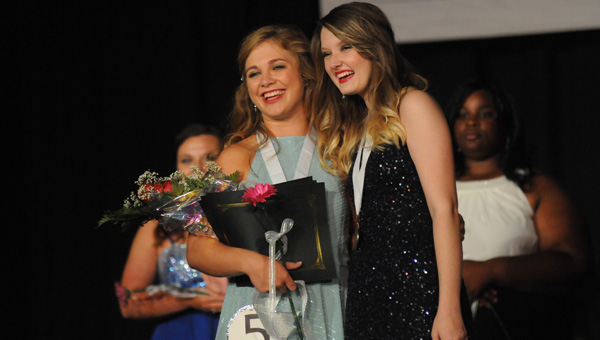 Cailyn Thompson is no stranger to the spotlight.

The Fort Dale Academy senior has performed the national anthem at Montgomery’s Riverwalk Stadium prior to a Montgomery Biscuits game not once, not twice, but three times.

On Saturday night, the spotlight was once again on Thompson, but this time it wasn’t on the baseball diamond. It was on the well-worn wooden stage of the historic Ritz Theatre as she was named Butler County’s Distinguished Young Woman for 2015.

“I was very surprised and very, very happy,” Thompson said of being named the county’s Distinguished Young Woman.

Thompson also received the Spirit of Distinguished Young Women Award, which is voted on by the participants, as well as winning the fitness portion of the competition.

She won $2,300 in scholarship money, as well as $500 to help cover the costs of competing on the state level.

Thompson said she’s wanted to compete in the contest since she was a little girl, but never imagined what it would actually be like to compete.

“We started preparing a week before the program and that’s when it got really stressful and really intense,” Thompson said with a laugh. “It was great, though. The whole experience was wonderful and the night of the program went by in a flash.”

She said a highlight for her was building relationships with the other contestants.

“I met four girls I didn’t know, and was able to share the experience with three of my best friends from Fort Dale,” she said. “The bonds we all made were pretty special.”

Fort Dale senior Ashton Scott was named first runner-up. She also won the scholastic, self-expression and interview portions of the contest. She received $2,250 in scholarship money.

All eight participants were presented with $100 scholarships from the Proud Papas — a group of fathers of previous winners.