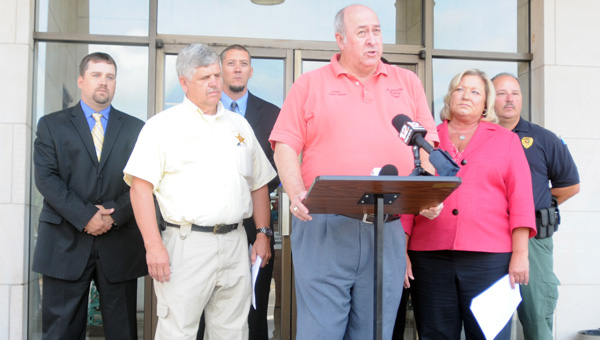 “Meth is a drug that we take very seriously in Butler County,” Greenville Police Chief Lonzo Ingram said. “Each of us works very closely together and with our county’s drug task force to fight against this problem that’s growing in our communities. We’ve come a long way in this fight, and much of that progress is thanks to the state’s comprehensive anti-meth law, which was passed in 2012.”

Under the new law, those purchasing pseudoephedrine must present a valid driver’s license, government ID, military ID or passport.

Such products can only be purchased from a pharmacist at a licensed pharmacy and the purchase is logged into the National Precursor Log Exchange (NPLEx) a real-time electronic logging system used by pharmacies to track purchases. An individual is allowed to purchase 7.5 grams of pseudoephedrine a month.

The medicines are still non-prescription, but purchases are logged in the NPLEx, which tracks the sale of all of over-the-counter cold and allergy medications containing pseudoephedrine.

While the law makes it more difficult to purchase pseudoephedrine, it does not require a prescription to purchase the medicine.

In Butler County during the past year, the Second Judicial Drug Task Force has conducted 34 investigations, and made 24 arrests, while monitoring 39 people based on information gathered from the NPLEx system.

According to the Alabama Criminal Justice Information Center (ACJIS), the agency responsible for securely recording the data generated through the NPLEx system, in 2013 there was a statewide total of 101,739 blocked sales of products containing pseudoephedrine. These blocked sales resulted in over 257,816 grams of potential precursor chemical ingredients staying off the streets of Alabama.

Butler County District Attorney Charlotte Tesmer said the NPLEx system has made it easier to prosecute cases involving the production and distribution of meth.

“Last year in Butler County, we had a total of 149 blocked sales, and 387 grams of pseudoephedrine kept off our streets,” Tesmer said. “After an individual is arrested for a meth related crime, it is up to my office to prosecute the case. When the state’s anti-meth laws changed, they made it easier for us to obtain vital information necessary to the prosecution of these crimes. They also placed larger financial responsibility for property damage restitution and crime scene clean up on the shoulders of those who are found guilty for involvement in the manufacture and distribution of meth. At the end of the day, these changes save taxpayers a lot of money, and make our community a safer place. I’m proud of the progress we’ve made.”

Butler County Sheriff Kenny Harden said the progress made in the county’s battle against the production and distribution of meth has been made possible by the various agencies throughout the county working together.

“It requires each of us working very closely together to keep an eye on the production and distribution of meth,” Harden said. “Once we catch the bad guys the work isn’t over. We’re very fortunate in Butler County to have a strong partner in District Attorney Tesmer who prosecutes the crimes.”

Alabama’s comprehensive anti-meth bill includes features such as the establishment of a drug offender database; enhancement of the drug paraphernalia laws to allow prosecution of intent even if pseudoephedrine is absent; reductions in the monthly allowable amount of pseudoephedrine that any one person can purchase; and the establishment of a felony change for anyone convicted of being involved with smurfing, which is a practice in which someone planning to cook methamphetamine pays someone else to go to a pharmacy and purchase a monthly allotment of pseudoephedrine in order to amass the necessary quantity of the product to produce meth.

The Alabama Drug Abuse Task Force reports that most meth currently available for sale in Alabama is higher-grade crystal methamphetamines, also known as Ice, which is manufactured in Mexico or California and smuggled into the state by Mexican drug cartels or other traffickers.

According to the officials, this imported meth accounts for as much as 80 percent of all meth currently seized throughout the state.

“The increase of imported meth suggests that Alabama’s laws are working,” Harden said.