Thompson hoping to dance to title

Sometimes, your talents can lead you to unexpected places. For Cailyn Thompson, that was certainly true.

It all started when she found an online ad to audition to sing the national anthem at a Montgomery Biscuits’ game. Thompson’s family encouraged her to try out.

“I was so nervous because of all of the other talented singers auditioning too,” said Thompson.

Thompson held her own. The Fort Dale Academy senior has now performed the national anthem for the Biscuits three times.

She’s also earned a spot as a Biscuit Buncher.

“Biscuit Bunchers are the ones who throw the biscuits to the crowd, dance on dug outs, etc.,” explained Thompson.

Thompson described her interview for the Biscuit Bunchers as “very unique.” 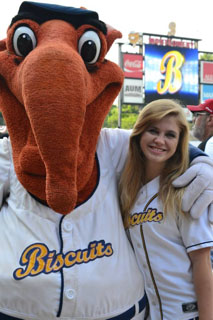 “We were asked what kind of kitchen appliance we would be,” said Thompson, “So naturally, I was the last person to answer, bringing me to think of the only thing everybody else hadn’t named: A waffle maker.”

It was this spontaneous answer, and Thompson’s creative dancing during her tryout, that landed her the job as a Biscuit Buncher.

“This really is such a unique opportunity,” said Thompson. “I have met so many people, and important guests.”

Thompson has also made it a point to make sure even the coach for the Biscuits knows her name.

“To be able to have this job has been such a blessing,” said Thompson. “And I really couldn’t picture myself having any more fun than doing this.”

Thompson hopes to also dance and sing her way into the judges hearts at this year’s Butler County Distinguished Young Women competition.

She is one of eight seniors from across the county competing for the title of Butler County’s Distinguished Young Woman.