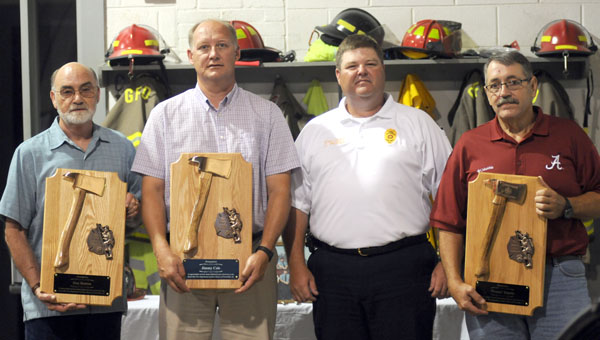 The Greenville Fire Department celebrated an end of an era Tuesday night with the retirement of three longtime firefighters.

Dan Hutton, Jimmy Cole and Phillip “Peanut” DePolo were honored during a ceremony at Fire Station No. 1.

Combined the three men had nearly 100 years of service to the GFD and the City of Greenville.

“These three are some of the last firefighters to serve under Chief (W.E.) Giddens,” said former Chief Mike Phillips. “This is almost an end of an era in that regard.”

Mike Phillips, who served as chief for 21 years before retiring in March of 2013, said all three were men of character.

“We spent a lot of time together here at the fire department,” Mike Phillips said. “We had a lot of good years and good times together, and in the early days we fought a lot of fires together. I appreciate their friendship.”

Along with the retirement ceremony, the GFD also held a badge pinning ceremony for the department’s new sergeants.

“I’m proud of our new sergeants,” Chad Phillips said. “They did an excellent job with the testing. We didn’t make it easy on them. I want to personally congratulate them on a job well done.”