First responders prepare for the worst 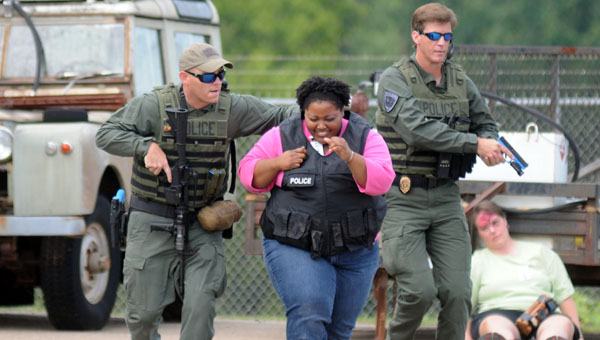 In all 259 people were involved in the exercise, which was funded with a $20,000 grant from the Department of Transportation. According to Butler County EMA Director Shirley Sandy, the county is responsible for a match of $4,183, which will be done with overtime hours and in-kind services.

“(The exercise) gave us a chance to see where our holes are,” Sandy said. “It also let us see what we do well and what resources are available to us if there were an emergency situation like this.”

The exercise began in McKenzie with a school bus being struck by a train near the intersection of Brooks and Elizabeth Streets. Fire and rescue personnel, as well as local law enforcement, responded to the scene and treated crash victims, some of which were transported by helicopter to local hospitals.

Volunteers from the community, many covered with realistic makeup blood, played the role of the victims.

Shortly after the first incident, fire and rescue personnel were called to Mac Crenshaw Memorial Airport after a small commuter plane crashed. The aircraft was reported to be on fire near several 55-gallon drums of organophosphate material.

The Greenville Fire Department’s HAZMAT team worked to secure the area and treat the victims of the crash. While they worked the scene, 911 received several calls about a hostile individual who was armed and holding a hostage inside a building on the airport grounds. 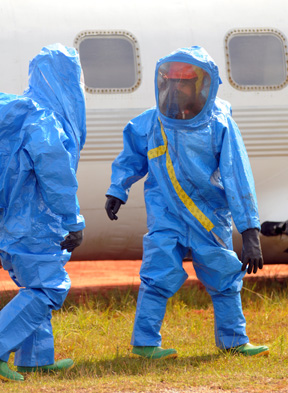 The Greenville Police Department’s Special Response Team was called to the scene. After killing the suspect and rescuing the hostage, the team discovered a white powdery substance in the suspect’s possession.

The Civil Support Team was then called in to assist since the Greenville HZAMAT team was still working the crash scene.

“I thought it was a very good exercise,” Greenville Police Chief Lonzo Ingram said. “It tested our personnel, and I thought they did a very good job. Our SRT team holds regular training exercises, but it was good for them to be able to be involved in such a large-scale exercise, and I thought they did an outstanding job, as well as our other officers and the fire department. We hope not to have situations like this, but it’s something we need to be prepared for.”

The exercise was designed to familiarize emergency responders with the incident management system during multiple incidents involving multiple agencies.

“The exercise was held to challenge and strengthen our first responders’ skills, and to find areas that need improving,” Sandy said.