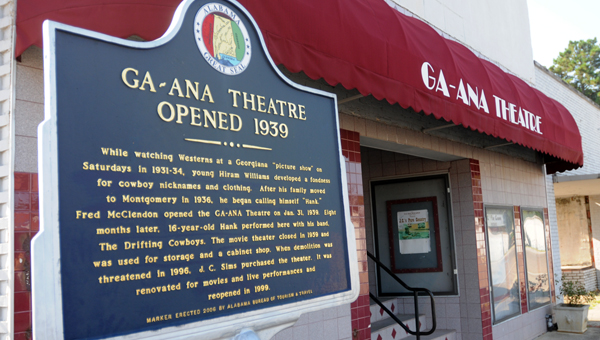 The GA-ANA Theatre has closed its doors. The theater, which originally opened in 1939 and re-opened in 1999, has shown many movies over the years and also hosted a number performers, including the legendary Hank Williams, Sr. and his band The Drifting Cowboys. (Advocate Staff/Andy Brown)

For the second time in its 75-year history, the GA-ANA Theatre is closing its doors.

“It’s closed due to health problems, and we don’t know exactly when it will be opened back up,” Layton said.

After two decades of showing movies and hosting musical acts, such as legendary country singer Hank Williams, Sr. and The Drifting Cowboys, the theater closed in 1959.

After closing the building was used as a cotton warehouse and cabinet shop, and finally stood empty for many years.

In 1996 when talk of demolishing the building kicked up, J.C. Sims, Max Sims and Cecil Cannon stepped in and purchased the building.

After years of work to bring the building back to its former glory, the theater reopened in 1999. Since that time the theater has hosted gospel performances, country concerts, movies and more.

Rosie McLain Till is one of the many performers that has graced the old theater’s stage.

“I performed on this stage about three months after losing my mom,” Till said. “I looked down on the stage and there were names, one of them was Mary Lee, which is my mother’s name. I didn’t know there was a performer with that name, but in that moment I knew she and my mom were still there watching me sing.”

The GA-ANA Theatre was scheduled to host “Watermelon Wine: Remembering the Golden Years of Country Music” on Aug. 16. The show, which was to feature authors Frye Gaillard and Rheta Grimsley Johnson and southern songwriters Davis Raines and Pamela Jackson of Nashville, would have combined readings and performances of original songs to examine the legacy of southern folk, blues and country music through the lens of literature.

That event has now been cancelled.

While the theatre is closed, Layton said it will still serve as the home base for the television show, “A Taste of Country.”

The show will continue to air at 5:30 a.m. on Saturdays on WAKA.

“We’ll still do the show there, but the theatre is closed until further notice,” Layton said.