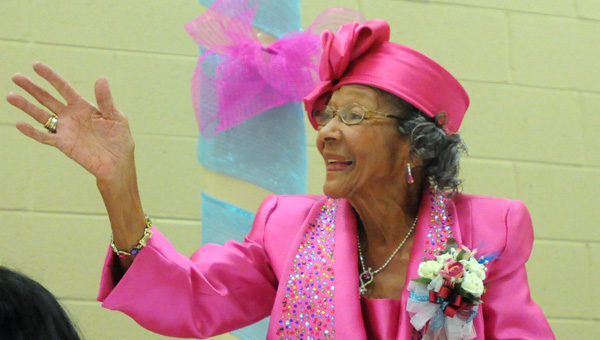 Magnolia Brown flashes a smile and waves to a guest during her 95th birthday party Saturday at the Greenville High School cafeteria. (Advocate Staff/Andy Brown)

On Saturday, Magnolia Brown was surrounded by her rather large family — many of whom started out as friends. The large crowd gathered at the Greenville High School cafeteria to celebrate “Mother Magnolia’s” 95th birthday and the impact she’s had on those in the Greenville community.

Henry Howard, Brown’s nephew, described his aunt as a “loving and Christian-hearted person.”

“To some she’s been a mother. To others she’s been a grandmother or an auntie,” he said. “But she’s been supportive to everyone. She’s a very loving person.”

Damascus Missionary Baptist Church pastor Frank Williams compared Brown to Naomi from the Book of Ruth and cited how even after Ruth’s husband, Naomi’s son, had died, Ruth chose to stay with Naomi.

“Naomi was the kind of woman people wanted to be around,” he said. “Mother Magnolia is that kind of woman. She’s always encouraging. She’s always got something nice and good to say. We’re blessed to have her as a member of Damascus. God could have put her anywhere, but he put her here with us, and what a blessing.”

During the celebration, Brown was honored with short speeches from a number of those in attendance, including Butler County Commissioner Frank Hickman.

“It’s an honor to know (Miss Magnolia),” Hickman said. “She’s truly a blessing to our community. Whenever I see her, my day immediately gets better.”