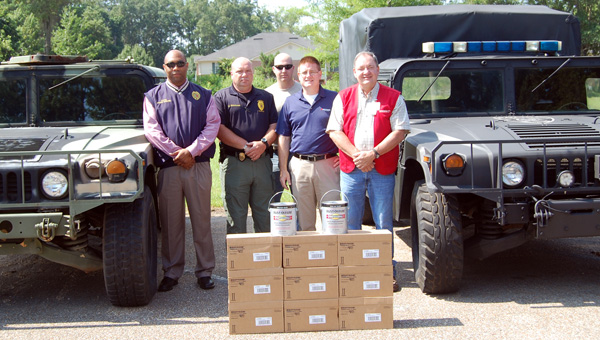 The Greenville Police Department recently got a helping hand from a local business.

Since October, the GPD has been working to refurbish a number of vehicles it received through the Defense Logistics Agency Disposition Services’ Reutilization, Transfer and Donation (R/T/D) program.

Marvin’s, D&T Emergency Lighting, Greenville Class Company and Purvis Signs have all donated supplies or manpower to the project, which led to two 1980s-era Humvees, which have an estimated value of $40,000 each, being revamped.

With more vehicles in need a freshening up, Marvin’s once again decided to help out, this time getting one its vendors involved in the act.

Marvin’s and Rust-Oleum recently donated 20 gallons on paint to be used in the refurbishing of two 5-ton trucks, three trailers, and two Humvees.

“We want to be involved in the community,” said John Shell, store manager for Marvin’s. “The police department has always been very responsive to any of our needs and when the opportunity to help them out came up, we jumped at it.”

The vehicles will be used by the GPD’s Special Response Team, and can also be used during storm situations, such as the ice storm that hit the area in January.

Jim Doody, Rust-Oleum senior area manager for the Southeast Division, as well as Shell, were on hand for the donation.