One could say she inherited it.

“My dad started each of my sisters and myself playing tennis ever since I can remember,” Scott said. “It’s basically turned into a family sport for all of us.”

Scott has excelled on the court.

As a junior, she played as Fort Dale Academy’s No. 1 seed and led the Lady Eagles to a runner-up finish at the Alabama Independent School Association state tournament, while advancing to the semi-finals in individual play.

For Scott part of the draw of the sport is that it combines physical skill with mental agility. That’s a perfect fit for the FDA senior who also excels in the classroom and is a member of the National Honor Society and Beta Club.

“Tennis isn’t just something you pick up on,” said Scott. “Tennis is so much more of mental sport, and it makes you think.” 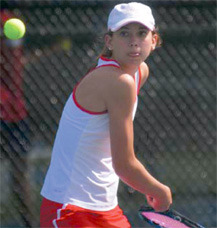 Scott is hoping she can take the lessons she’s learned on the court and use them to help her capture a different sort of title in the coming weeks.

Scott, who is also a member of Fort Dale’s cheerleading squad and basketball team, is one of eight seniors from across the county competing in the Distinguished Young Women contest.