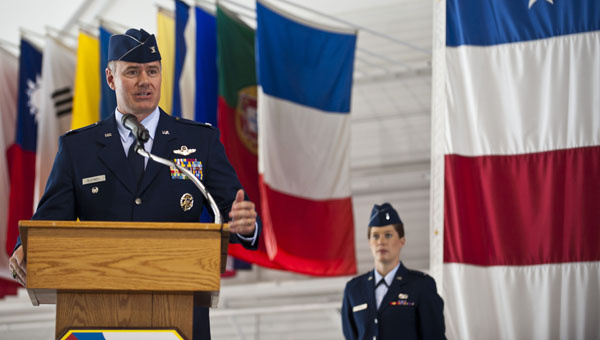 Col. Richard H. Boutwell, 99th Air Base Wing commander, accepted command of the wing during a ceremony held at the Thunderbird hangar on Nellis Air Force Base in Nevada June 27.

Boutwell is a 1985 graduate of Greenville High School and is the son of Mr. and Mrs. LeRoy Boutwell of Greenville.

“To take on the responsibility of the 99th [ABW] takes someone special,” Silveria said. “We have that in Col. Rick Boutwell.”

Boutwell, most recently served as the Chief, Force Application Division, Joint Staff/J8 at the Pentagon, Virginia. He entered the Air Force in 1991 as a distinguished graduate of the Troy State University Reserve Officer Training Corps program. Boutwell has flown the T-37, T-38, F-15A,B,C,D and F-16C,D and has more than 3,500 hours as a command pilot and more than 149 combat hours in the F-15C.

“Col. Boutwell was carefully selected and is the perfect choice for this command,” Silveria said. “We all know that he will lead the 99th [ABW] to new heights.”

Upon relinquishing command of the 99th ABW, Col. Barry Cornish, expressed the difficulties that would come with leaving his home of the last four years as both 99th ABW commander and 57th Wing vice commander.

According to Cornish, he and his family have become invested in Nellis AFB and will really miss the base and its Airmen. One thing that will ease the process of departing Nellis AFB is the knowledge that it’s being left in capable hands.

“I couldn’t think of a better guy to take my spot,” Cornish said.

After accepting command, Col. Boutwell approached the podium to speak to the attendees for the first time as the commander of the 99th ABW.

“Being a wing commander is a humbling privilege and an honor, and a responsibility I do not take lightly. Thank you for the confidence you have placed in me and thank you for the opportunity to lead the men and women of the 99th ABW,” Boutwell said. “[My wife] Leslie and I are extremely excited to become part of such an incredible organization and we look forward to writing the next several chapters of history with you.”

He ended his speech with an assurance that under his command the 99th ABW will continue on its ascending path.

“This wing has had a long-standing reputation, throughout its history, for doing things right and winning countless awards. Vince Lombardi said, ‘Winning is not a sometime thing; it’s an all-time thing. You don’t win once in a while, you don’t do things right once in a while, you do them right all the time. Winning is a habit,’” Boutwell said. “There is no doubt in my mind that we will do things right as we continue to provide world class base support to our mission partners.”