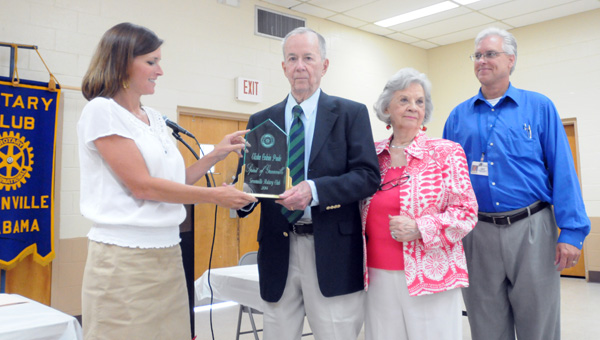 Elisha Poole’s philosophy for making a difference is fairly simple.

Lead, follow, or get the heck out of the way.

Poole has chosen to lead.

“It’s nice to be surrounded by my peers, and to be recognized for whatever contribution I’ve made,” Poole said. “I appreciate this, and it’s an honor.”

The Spirit of Greenville Award is the highest recognition given by the club to a non-Rotarian.

“He’s done so much for our community,” Rotarian Dr. Jim Krudop. “It was not a hard choice to select Elisha for our Spirit of Greenville Award.”

Poole, an Eagle Scout and a veteran of the U.S. Air Force, began practicing law in Greenville in 1955 following his graduation from law school at the University of Alabama.

After returning home to Greenville, Poole administered the Babe Ruth League program for the Rotary Club of Greenville and later served as club president in 1962.

He helped found Fort Dale Academy in 1969 and served as board chairman from 1969-1980. For his service and leadership he was elected to the Alabama Independent School Association Hall of Fame in 2005.

In 1964, Poole was named Man of the Year by the Greenville Jaycees.

On Thursday, Poole shared his philosophy for leadership with the Rotarians.

“I’ll give you two aspects of leadership,” he said. “The first thing is to surround yourself with smart people who aren’t afraid to tell you no. The second thing is either lead, follow, or get the (heck) out of the way.”

The club presented Poole with the award not only for the contributions he has made to the Greenville community over the years, but also for the legacy of community service he has cultivated in his family.

“Another tribute of what he has done for us is quite evident through his family. Both sons, Calvin and Cleve, have done so much,” Krudop said. “They’ve followed in their father’s footsteps. They mean so much to this community. It’s a tremendous legacy that Elisha has created.”

The club also gave Poole the distinction of being a Paul Harris Fellow.

A Paul Harris Fellow is an individual who meets high professional and personal standards set forth by Paul Harris, founder of Rotary.