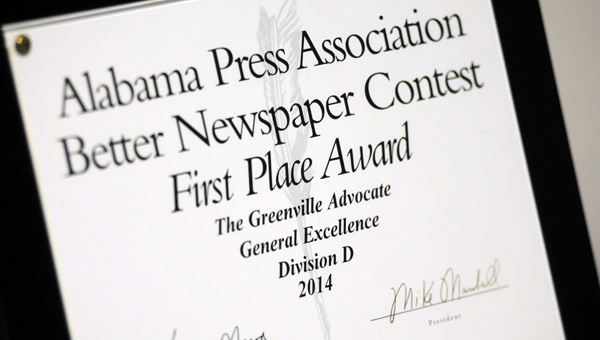 “Our staff is very excited to have received the General Excellence Award this year,” Greenville Advocate managing editor Andy Brown said. “We take great pride in covering the news in our community and putting a quality product in our newsstands. We certainly don’t do this job for awards, but it’s nice to be recognized by our peers for producing good work.”

Thirty-seven newspapers submitted 968 entries in this year’s contest. The entries were also judged by members of the West Virginia Press Association.

“We strive to produce publications that appeal to all of our readers, advertising partners and community,” Publisher Tracy Salter said. “I am proud of the staff of The Greenville Advocate for being recognized with a total of 28 awards for advertising and editorial excellence by the Alabama Press Association.  A lot of hard work and dedication goes into producing award-winning publications and it’s an honor to be named Alabama’s best small weekly newspaper by a panel of our peers.”

The awards were presented Saturday night at the APA’s 143rd summer convention, held at the Hilton Sandestin in Destin, Fla.

The Advocate won a total of 28 awards.