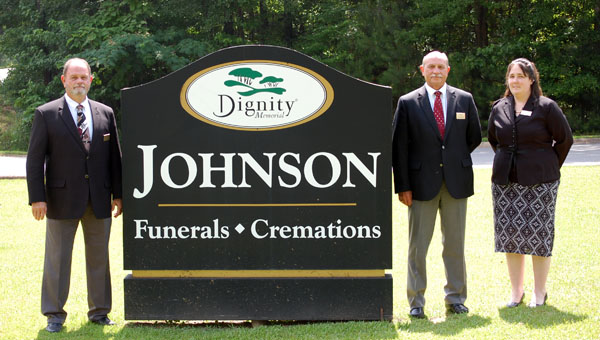 In 1914, Jim Johnson founded what is now Johnson Funeral Home. This month, the funeral home is celebrating its 100th year in business. Pictured are, from left to right, Eddie Holder, Mike Middleton and Amanda Gomillion. (Advocate Staff/Morgan Burkett)

Mahatma Gandhi was arrested for the first time for campaigning for Indian rights in South Africa, and the first full-color film was shown in London.

That same year, another first took place in Georgiana.

Johnson Funeral Home opened its doors for the first time.

This month, Johnson Funeral Home is celebrating its 100th year in business.

In 1914, Jim Johnson founded what is now Johnson Funeral Home. Jim Johnson had two sons, James Henry Johnson and Walter Frank Johnson, who helped run the funeral home and hardware businesses. In 1967, the sons took over the family businesses from their father, with Walter Frank Johnson in charge of Johnson Funeral Home and James Henry Johnson in charge of the hardware store.

The brothers eventually moved the funeral home from downtown Georgiana to its current location on Hwy. 106.

“I felt like it was something the community needed,” said Middleton, “We wanted to continue the business like the Johnson brothers did, by honoring the families.”

In 1996, Middleton and Herring sold the funeral home to ECI Services. In 1999, Johnson Funeral Home was acquired by an affiliate of Service Corporation International, and became a member of the Dignity Memorial network of funeral, cremation and cemetery service providers.

While Middleton is no longer the owner, he is still managing the funeral home.

“We have been serving some of the same families since Johnson Funeral Home has been opened,” said Eddie Holder.

The staff at Johnson Funeral said it is proud to be continuing the tradition of service that was started by the Johnson family a century ago.