Once a picker, always a picker 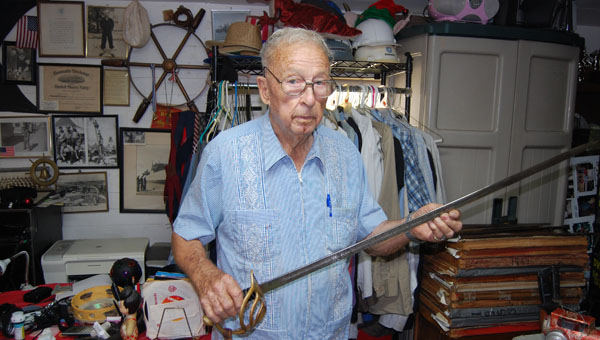 Georgiana’s Rob Williams shows off one the swords in his collection. Williams has been collecting military memorabilia for as long as he can remember. (Advocate Staff/Morgan Burkett)

What started off as simple scrapbooking has turned into a monumental hobby.

Georgiana’s Rob Williams has been collecting items from wars for as far back as he can remember.

“I’ve just always been a collector,” said Williams. “It started as scrapbooking, but after being in WWII I would see relics from the war and I would keep them and label them as a sort of remembrance.”

Williams has many swords and even a suit from a Japanese worker.

“The Japanese workers were captured on our ground, so we made them work for us,” said Williams.

Inside of the hat of the Japanese suit is the name of the worker written in Japanese.

While in the Navy, Williams had a fascination with the planes. He began to build model planes from kits, and made many of these planes from aluminum cans.

Williams was born in Georgiana. He completed the 11th grade before spending two years in the Navy. After completing his service he returned to Alabama and graduated from Troy University, then known as Troy State Teaching College.

During this time was the Great Depression and Williams collected tokens.

Tokens were worth 1/10 of a cent at the time and are very limited today. These coins were first made of aluminum, but due to the shortage of aluminum, the tokens were made of plastic and wood. Williams has an entire bag full and proudly shows them off.

Williams plans to collect and fix more relics for as long as he is able.

When asked what was his favorite collected item, Williams joked and said, “Well, my wife, of course. She’s the one who puts up with me keeping all of these things.”

Williams is married to Joann Williams.