Chamber serves up a Taste of Crenshaw 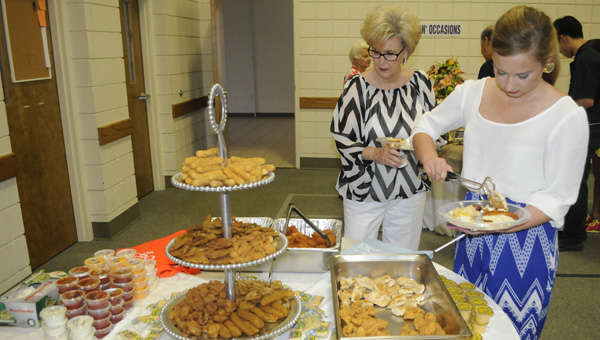 The Luverne United Methodist Church’s Dei Center was transformed into a cuisine utopia Thursday as the Crenshaw County Chamber of Commerce served up the second annual Taste of Crenshaw.

Carol Staller, secretary and treasurer with the chamber, said that last Thursday’s event was a worthy successor to last year’s offerings.

“The purpose of Taste of Crenshaw is to showcase all of the great food and all of the great restaurants and caterers that we have in Crenshaw County, and to show appreciation to all the members for their support of the chamber,” Staller said.

“I would say that this year is a step up from last year, as we had more members attending.”

Gran’ Occasions, Chicken Shack, Mainstreet Sweets, Dinner Table, Pepsi, Max Pizza and New China Restaurants were all in attendance, and each presented a sizeable sample of their respective menus for connoisseurs to dive into.

The attendees were also treated to a number of door prizes, including various coupons and gift certificates from the establishments present, T-shirts and, eventually, a flat-screen television.

Taste of Crenshaw’s humble beginnings as the brainchild of chamber board member Al Snellgrove in a random board meeting has grown into what Staller hopes will become an annual event that the general public can look forward to.

In fact, changes to improve next year’s offerings are already being considered.

“We may make some changes next year, such as opening it up to the public,” Staller said.

“We’ve had that thought in our minds.  Either way, it’s definitely headed in the right direction.”