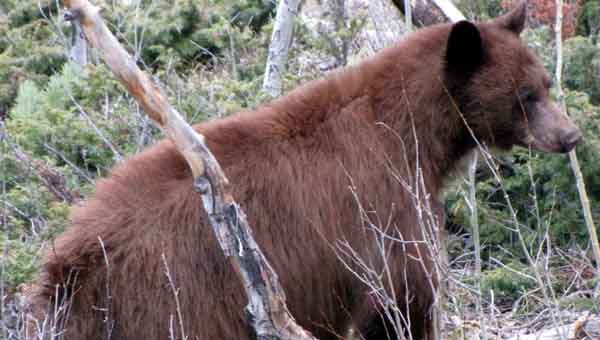 A black bear (similar to the one in this photo) has been sighted in Butler County, according to Butler County Sheriff Kenny Harden. The black bear is the smallest of the North American bears. Black bears exhibit several different color phases. The most common color is black, from which they draw their names. Other color phases include brown, cinnamon (reddish-brown), blond and even white in isolated coastal areas of British Columbia. (Photo courtesy of Lyle Willmarth/ADCNR)

A black bear has been sighted in Butler County.

Butler County Sheriff Kenny Harden confirmed that a black bear has been spotted in the 1300 block of Ridge Road and along Hwy. 263 between Hwy. 185 and County Road 44.

“It’s been documented that there’s a bear up in that part of the county,” Harden said.

According to Harden, this is not the first time his office has received reports of bear sightings.

“We’ve had calls before about bears,” he said. “It’s not unusual. We have some bears in the area.”

According to the Alabama Department of Conservation, the American black bear is the most widespread inhabitant of all the North American bears.  Their population was once estimated to be two million, but has been reduced to an estimated 700,000 animals due primarily to habitat destruction.  Black bears inhabit forested areas scattered throughout North America.  They can be found as far south as Florida and as far north as Alaska. Black bears in Alabama are primarily limited to Baldwin, Mobile, and Washington counties, however, reports of bears have been confirmed in several northeast counties but are suspected of being transient bears from other southeastern states.

“Most people think of black bears as aggressive predators but nothing can be further from the truth,” said Justin Monk, Wildlife Biologist, Alabama Division of Wildlife and Freshwater Fisheries. “On the contrary, black bears are actually poor predators. They mostly feed on plants, berries, nuts, roots and bark. Only a small percentage of a black bear’s diet is protein and most of that comes from eating insects. Most public opinions on black bears tend to be negative because people are not educated about the species. Black bears are just like most all wild animals, in that they will almost always run when given the chance. Black bears are very shy animals. This is why most people have never witnessed one in person. Rarely, black bears may attack if they feel threatened or when a sow senses her cubs are being threatened. Although they are usually harmless, you should always avoid any kind of interaction with black bears. They are large and powerful wild animals.”