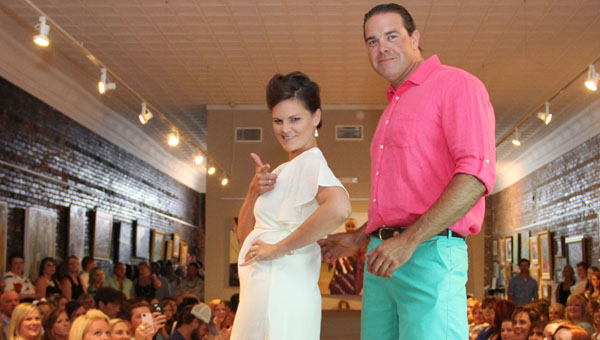 Laura Sadowski and Ben Campbell strike a pose on the runway during the inaugural Southern Social, which featured a fashion show hosted by Southern Mint Boutique and The High Horse Gallery. (Photo by Snazzy Snapshots by Anna)

The evening began with a fashion show presented inside The High Horse Gallery featuring some of the hottest shades of summer, sequins, and everything between.

Over 100 guests attended the fashion show and were entertained as more than 20 models displayed apparel and accessories from Southern Mint Boutique.  Following the fashion show, more than 200 guests enjoyed live music by The Park Band, dancing, southern barbecue and sausage, and plenty of fun.

Initial plans to host the Southern Social started back in March, and according to Chae Brown, owner of Southern Mint Boutique, came together nicely as she and High Horse Gallery owner Mary McKinley put their plan into action.

“I think we need more events in our community for people to enjoy,” said Brown.  “The Southern Social was the first big event that I’ve been a part of hosting and I really wanted it to go smoothly and have continued support of the city and other businesses going forward for future events.”

The event brought out a diverse group of guests ranging from teenagers to adults.

“Everyone seemed to have fun.  We were able to control the overall evening thanks to the help of the Greenville Police Department and many other people that assisted with serving food and beverages, and overall guest hospitality,” said Brown.

Brown said the fashion show featured many different styles and had everything from boho- chic, bold neon colors, to fringe and polished looks.

“We wanted to have something to suit everyone,” said Brown.

Brown said that the event was a success mainly because of the generous support received from sponsors and friends.

“A lot of people helped behind the scenes to make the event come together so nicely.  I cannot express how thankful I am for our sponsors, our models, and for friends that came out and pitched in to make the evening a success,” said Brown.

High Horse Gallery owner Mary McKinley said the fashion show was an opportunity to invite people inside the gallery to view the talented work of artists that line the walls of the gallery.

“The fashion show was first class and extremely well done.  Everyone enjoyed themselves,” said McKinley.  “The band was good and overall the event was a success. I always want to be a part of anything that promotes our downtown area. I like to see downtown merchants join forces and get excited about people coming to our downtown.”

Those in attendance are already looking forward to Greenville’s next event.

Julie Sellers Swann said that the Southern Social was the best event that she’s attended in downtown Greenville.

“It was such a great event,” Swann said. “Downtown is going to be a booming place to be with such progressive business owners.”

General admission to the fashion show and after party was free, however, donations were accepted in effort to raise funds for the Butler County Humane Society.  The event raised $526 that will be donated to the Humane Society to help assist with food, animal care accessories, and other items needed to aid in the care of animals.