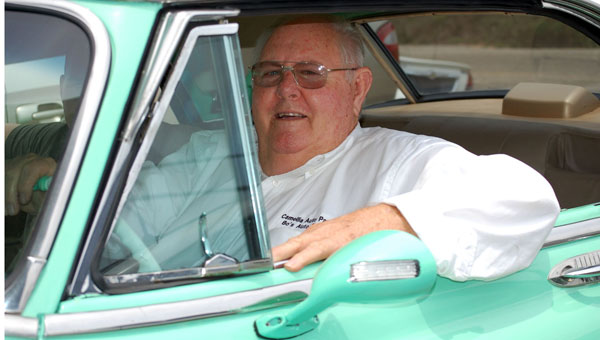 For some folks cars are little more than a mode of transportation – a way to get from Point A to Point B.

For Bo Thagard, cars are a passion.

The one-time farmer even managed to turn his passion into a thriving business.

“I started off as a famer, farming corn, cotton and peanuts,” said Thagard. “But farming just wasn’t making enough money.”

So Thagard decided to get into the automobile business. In 1985, Thagard opened Camellia Auto Parts and Bo’s Auto Sales on the former site of Fox Chevy Auto Dealers in Greenville.

“We built on to the old building and put a shop out back where we could work on the cars,” said Thagard. “I like to sell and fix old cars. I’ve always liked to work and this is probably the best way I could think to make a proud living.”

While Thagard mostly sells newer model cars at his Cedar Street business, it’s the older model automobiles that hold a special place in his heart.

He admits he has a soft spot for 1957 Chevrolet Bel Air.

He’s owned three 1957s and a 1950 Bel Air, which was the first year Chevrolet produced the model.

Thagard, who uses his classic cars as daily drivers, often takes them to car shows in cities like Pigeon Forge, Tenn., Biloxi, Miss., and Moultrie, Ga.

Thagard explained that he plans to give his remaining black 1957 Bel Air to his family and sell the 1950 Bel Air.

But for now, Thagard will continue to put his passion of display at car shows and as he cruises the streets of the Camellia City in his classic Chevrolet.