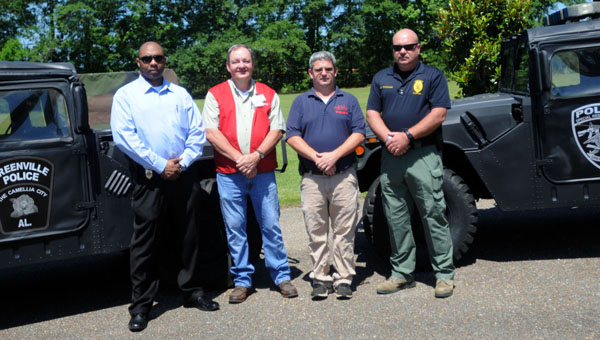 A number of local businesses have helped the Greenville Police Department turn the old to new.

Thanks to the assistance of Marvin’s, D&T Emergency Lighting, Greenville Class Company and Purvis Signs, the Greenville Police Department was able to refurbish two Humvees it received through the Defense Logistics Agency Disposition Services’ Reutilization, Transfer and Donation (R/T/D) program.

The companies donated materials such as glass, signage, paint, metal tubing and lighting, as well as man-hours.

“We really appreciate the business owners and managers donating materials and time to help us refurbish these vehicles,” Capt. Anthony Barganier said.

The GPD started the work of refurbishing the vehicles in October and recently completed the exterior of the two 1980s-era Humvees, which have an estimated value of $40,000 each.

Lt. Marcus Christianson, who helped spearhead the work on the vehicles, said he estimates that approximately $2,500 worth of materials and man-hours was spent on each vehicle.

“We want to be involved in the community,” said John Shell, store manager for Marvin’s. “The police department has always been very responsive to any of our needs and when the opportunity to help them out came up, we jumped at it.”

Charles Thomas with D&T Emergency Lighting had helped install the lighting on the GPD’s patrol cars. When he was approached about working on the project he was more than willing to help.

“Christianson asked me, and I was happy to help,” he said. “It was a challenge at times to figure out how and where to put lights on these vehicles since they weren’t meant to have these kind of lights on them, but we figured it out.”

The vehicles will be used by the GPD’s Special Response Team, and can also be used during storm situations, such as the ice storm that hit the area in January.