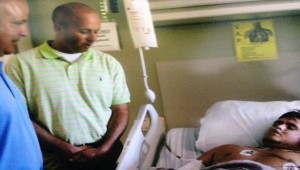 Brantley High School Principal Dodd Hawthorne and assistant principal Ashley Kilcrease present injured senior Garrett Mitchell with his diploma while in the ICU Friday. Mitchell was injured in a farming accident, but is in stable condition and could return home by the end of the week.

Mitchell was injured May 21 while his mother, Taisha Dunn was showing him how to rake hay from their tractor.

“He had just cut the hay last weekend,” Dunn said, “and I was taking him around the field on the tractor to show him how to rake it.

“As we were riding, the step he was standing on on the tractor broke and when it did, he fell onto the tractor tire, which broke his ribs and lacerated his liver. I shut it down and slammed on the brakes and that skidded him across the hay field and burned his back.

“I could hear him hollering, but I couldn’t see him and didn’t know where he was under the tractor. I pulled forward and that was when it ran over his head.”

Dunn said that broke the orbital bone around his eye, and he also sustained a partially collapsed lung in addition to the broken ribs, torn liver and internal bleeding.

Mitchell was flown from the Crenshaw Community Hospital in Luverne to Baptist South Medical Center in Montgomery where he underwent surgery and was admitted to the intensive care unit.

On Monday, he was brought into a regular hospital room where Dunn said he will remain under supervision at least until the end of the week.

Ashley Kilcrease, Brantley’s assistant principal and head football coach, said the special graduation ceremony in the hospital was principal Dodd Hawthorne’s idea, but he was glad to join.

He said Mitchell was not told they would be coming, and he thinks the medication kept him from being fully aware, but “as we stayed, I think he got it.

“He was pretty excited.”

Dunn said the graduation meant a lot because Mitchell  “had always wanted to move back to Brantley and graduate high school where I graduated high school.

“He keeps asking to look at his diploma,” she said. “He’s very proud.”

She said she wanted to thank the community for their prayers and support after the accident.

“He’s getting better every day,” he said, “but I’m just thankful he’s still alive. It could have been so much worse.”

“He’s a lucky boy,” she said. “When he came out of surgery, the first words out of his mouth were, ‘tell Coach I’m ready to go in.’ He’s already got football on the mind.

“I don’t know what God Has in store for him, but he saved him.”