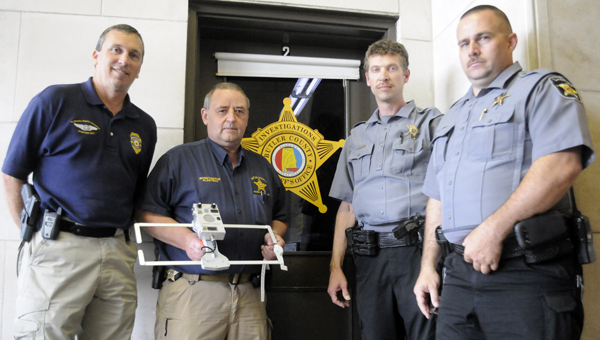 More than 33,000 Alzheimer’s patients in the United States go missing each year, and a third of them are never accounted for again.

Such startling statistics spur the creation of programs like Project Lifesaver, a program designed to locate individuals who wander off due to any kind of cognitive disorder, whether it be Alzheimer’s, autism, Down syndrome or dementia.

Residents enrolled in the program are given a transmitter bracelet to be worn around the wrist or ankle that emits a unique tracking signal.

In the event that the resident goes missing, the caregiver can notify their local agency and trained emergency teams will respond as soon as possible.

Project Lifesaver state coordinator Kent Smith visited the Camellia City to add four new deputies to the list of individuals who are trained and certified to respond to such a call.

Sean Klaetsch, James Harville, Matt Merritt and Lenny Lee are all trained to not only locate enrollers in the Project Lifesaver program, but are also able to train others.

The four paired up into two teams for a practical exam that involved finding a lost transmitter in a given amount of time.

Butler County Sheriff Kenny Harden said that he was proud of his deputies’ performance.

“The training we’ve done with it has gone really well,” Harden said. “They split up into two teams and went out looking for the transmitter, and each team was able to locate that bracelet and have it in their hands in less than 20 minutes.”

Smith said that people suffering from Alzheimer’s pose the stiffest challenge to locate, mostly due to the fact that it’s difficult to convince them that they are indeed lost.

“Those searches ended up averaging nine hours per search for someone that did not have the Project Lifesaver transmitter bracelet on,” Smith said.

“Once they had a Project Lifesaver bracelet, the average search turned from nine hours to 15-30 minutes on average. That’s a huge difference.”

Smith also noted that the program not only cuts down on costs incurred and potential medical bills, but it also minimizes the chance that any harm could befall the lost individual.

“When they’re lost, they can get in trouble really quick,” Smith said. “The difference is that if you search for someone and you find them nine hours later, they typically always will go to the hospital to be checked out for injuries.  But if you search for 15-30 minutes, you can usually take them back home.”

Harden added that Butler County residents should be proactive in taking care of their loved ones.

“We are encouraging anyone who has anybody with any kind of cognitive disorder to contact us and let’s put a bracelet on their loved one,” Harden said.

“We do ask for a $300 donation for the bracelet, but if they do not have the $300 we still will get a bracelet to put on them.  But they are required to come up here and do some paperwork that we have to have on file.”