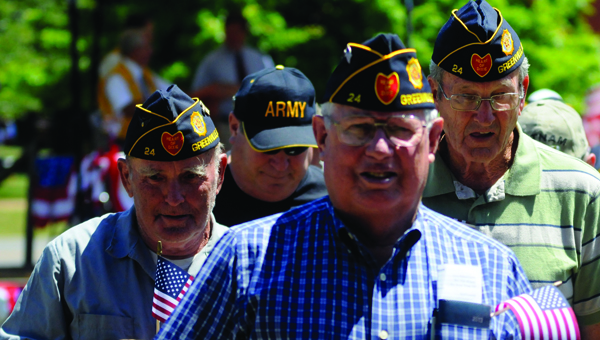 The Greenville Lions Club’s Memorial Day Celebration will include a Walk of Honor, where veterans from around the county march around the park. (File Photo)

A tribute to those who made the ultimate sacrifice will take place Monday morning in Confederate Park in Greenville.

The Greenville Lions Club is hosting its annual Memorial Day Celebration, with live music from the First United Methodist Church worship team kicking off at 9:30 a.m. in the park. A patriotic program will begin at 10:30 a.m.

Each year, the program includes a Walk of Honor, where veterans from around the county march around the park.

“The (highlight) is the Walk of Honor, which has a tremendous emotional impact on the veterans,” Lion Hubert Little said. “This year we are allowing family members of deceased veterans to walk in honor of those veterans if they would like to do so.”

“We encourage all veterans and family members of veterans to come and join us. It is important to recognize and honor their contributions to our country,” said Little.

The keynote speaker for this year’s event is Nimrod Frazer, author of “Send the Alabamians, World War I Fighters in the Rainbow Division.”

A tank platoon leader in the Korean War, Frazer was decorated with a Silver Star for Gallantry in Action.  He is also a member of the Alabama Business Hall of Fame, and a graduate of the Harvard Business School.

In 2005, Frazer became a founder and benefactor of the Croix Rouge Farm Memorial Foundation that commemorates the role and service of the 167th (Alabama) Infantry Regiment, a National Guard unit of the 42nd “Rainbow” Division of World War I. The memorial is located on the site of the Battle of Croix Rouge Farm in Fère-en-Tardenois, close to Château-Thierry, in France.

He is a member of both the American Legion and Veterans of Foreign Wars.

Little said this year a large tent will cover the park to allow those who attend to get out of the sun. Handicap parking will be available in front of City Hall and there will be golf carts to transport those who need assistance reaching the seating area.

Following the program, a barbecue lunch will be provided in the park.