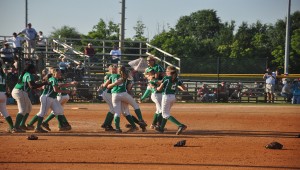 The newest set of state champions have a simple plan for celebration: they’re going to cover the Town of Brantley in toilet paper.

“First thing is we’re going to have a nice big meal because we haven’t done that in a while,” senior fielder Kelsey Hall said.

“Then,” senior shortstop Peyton Hill chimed in, “we’re going to go roll the coach’s house. And then the school. Basically all of Brantley will be white if we can find enough toilet paper.”

The Brantley High School Bulldogs have much to celebrate after a flawless run through the Class 1A state tournament Thursday and Friday with no losses and four wins, crowned by a 4-0 shut out victory over Lynn High School to claim the top title.

Wilcox said she didn’t expect the honor and gave all the credit to her teammates.

“I rely on my team so much,” she said. “They’ve always had my back. I didn’t even think it could be me.”

She also credited the Bulldogs’ defense with the win.

“I don’t even know what to say,” she said. “This is all so new to me. I was there when we won the state championship in basketball, but I’m in more of a supporting role in basketball and I’m a lot more involved here. I’m overwhelmed.”

“If there’s anybody that deserves all the success she gets, it’s her,” she said, saying Wilcox sees softball as a “year-round sport” and is training “while everyone else is at home watching TV.”

Kassidy also represents one of the team’s biggest challenges this season: the team is very young, with a roster primarily comprised of underclassmen and even junior high schoolers. Hall and Hill are the team’s only seniors and both have high expectations for those who will be left in 2015.

“I really wanted to win it, being my senior year, and I was hoping we would at least make it to the state championship, but the main thing was just hoping the younger ones would get some experience,” Hill said. “But there’s no doubt they can get here again next year.”

“They have a great shot,” Hall added.

Friday’s win not only marked the first state championship for the school’s softball team, but was the first time the team had even made an appearance in the state tournament since making the transition from slow pitch to fast pitch in 2000.

The seniors said the team’s younger players and its coaching staff are the ones most responsible for all the team’s success.

“A lot of the young ones stepped up, especially in the box,” Hill said. “They were a lot more calm than I was. I was biting nails by the fourth inning.”

“I think the coaches really kept the young ones focused,” Hall added.

But Hill said there is only one thought she keeps coming back to in the wake of a state championship, “It’s great to be a Brantley Bulldog.”