Luverne baseball season ‘not a disappointment’ 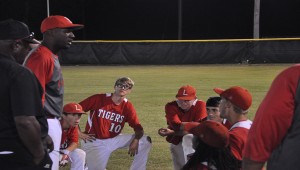 Luverne baseball players, including seniors Taylor Grant (center, left) and Zane Jones (center, right) listen to a post-game speech from head coach Andre Parks after losing twice to Houston Academy in the semifinals. Parks told players the loss will hurt for a time, but they should be proud of their accomplishments.

A run for the top came to a crashing halt May 8 for the Luverne High School Tigers as the baseball team was shut down by the Houston Academy Raiders in the Class 2A semifinals.

But head coach Andre Parks and members of the team said it didn’t come as a disappointment.

“We played a great baseball team,” he said. He said the Tigers made errors in both games, but gave the opponents credit for them.

“They hit the ball well, threw strikes and they had a lot to do with the mistakes we made.”

A week later, Houston Academy, which beat Luverne 9-1 and 11-1 in the semifinals, won the state championship, claiming the top title in Alabama.

Parks said that news made the season-ending losses less painful.

“It makes it a little easier to swallow,” he said. “We knew going into the game that Houston Academy was a good ball club and all year they’ve been pegged as a top team in the state.”

Junior shortstop Kenterious Womack and senior second baseman Jon Hayden Sanders said they also don’t regret the season’s end and see it as an earned win for their final opponent.

“They were the first team to just beat us,” Womack said. “Usually we mess up, but they just beat us. I don’t think we could have done much more than we did.”

“As a senior, I’m a little disappointed we’re through, but it makes me feel a lot better that a team better than us put us out rather than us beating ourselves.”

“We tip our hats to them,” Womack said.

Parks said that attitude is something the team has discussed and he’s proud of the way the players handled both the wins and losses this season.

“I think that shows the character of the players on the team,” he said.

“I think we had a tremendous season. Few people in the community expected us to get as far as we did and I think that’s a testament to the work (the players) did. I definitely don’t think it’s a disappointment.”

Parks said he has high hopes for the 2015 season after seeing this year what the team can do.

The Tigers will lose four seniors – Sanders, outfielder Marcell McMillian, first baseman Zane Jones and pitcher Taylor Grant – whose leadership, Parks said, will be hard to replace, but he will have six juniors and several underclassmen moving up with experience against high levels of competition.

“The blueprint of how to get where we are has already been established by what we’ve done this year,” he said. “They know what it takes.”

Womack and Sanders both said they were proud of what the team accomplished this season.

“I feel like we came a long way,” Womack said.

And both agreed with Parks that the team has laid a good foundation for success next year.

“I feel like next year we’ll be a little better,” Womack said, “and I think it helps that the people who are replacing the seniors have people to look up to.”

He said he has no regrets looking back on his career, but he had one parting word of caution for the team that hopes to vie for the state championship next year.

“Work hard and enjoy it,” he said, “because it’s going to end some time.”