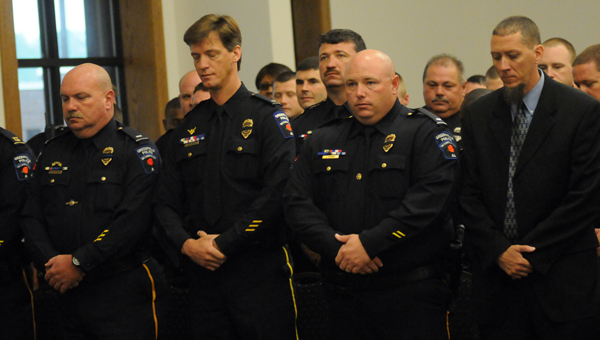 Local law enforcement officers honored their fallen comrades on Wednesday with a memorial service at the Wendell Mitchell Conference Center on the campus of LBW Community College. (Advocate Staff/Andy Brown)

Local law enforcement officers honored their fallen comrades on Wednesday with a memorial service at the Wendell Mitchell Conference Center on the campus of LBW Community College.

Officers George Bryan, Joe Herring and Gary Heath were remembered during the service. All three officers gave their lives in the line of duty while serving the City of Greenville.

“We want to honor the memory of the officers that lost their lives serving our community, and also celebrate their lives,” said Greenville Police Department Chief Lonzo Ingram said. “We have this service every year because we want to keep their memory alive.”

Cpl. Danny Bond received the GPD’s Officer of the Year award, which is sponsored by CorStone.

The GPD also awarded the Gary Heath Education Award to Lt. Malcom Owens. That award is sponsored by Camellia Communications.

Astralaga was on the scene during the hostage crisis in Midland City after Jimmy Lee Dykes boarded a Dale County school bus, killed the driver and took a five-year-old boy hostage. Dykes held the boy hostage in a bunker for almost seven days before law enforcement agents entered the bunker, killed Dykes, and rescued the child hostage.

KILLED IN THE LINE OF DUTY

1892: William Henry Barganier was killed while attempting to arrest a man wanted on multiple charges. When Barganier entered the boarding house where the man was staying, he was shot in the face and later died from the injuries.

1904: Greenville Police Officer George Bryan responded to a residence in the Till Community of Butler County to assist the Sheriff’s Office in serving a warrant on a suspect accused of burning down the Baptist church in Till. The suspect resisted and fired several shots. Officer Bryan was struck and critically injured. He died five days later.

1939: John T. Sanders, Sr. was killed while trying to apprehend a suspect. He was transporting a prisoner back to Greenville by train when the man suddenly jumped from the moving train near Georgiana. Sanders jumped out of the train and tumbled down a steep embankment. While Sanders successfully recaptured the escapee, he later died from injuries suffered during his jump from the train.

1968: Greenville Police Officer Joe Herring was thrown from his motorcycle while pursuing a fleeing vehicle on Hwy. 10 West.