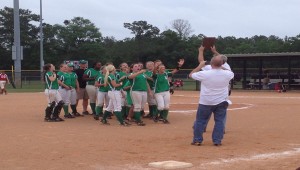 Brantley High School’s softball girls excitedly take their plaque after winning the regional tournament last week. The Bulldogs will travel to Montgomery today as one of eight teams competing for the Class 1A state title.

The shirts they practice in say, “Success is a choice” on the back.

It’s a motto the Brantley High School softball girls have taken to heart.

Head coach Christy Hawthorne said the team is young – she starts seventh and eighth graders and has only two seniors – but hard working and determined.

“They just work hard,” she said.

“It’s a great group of girls that come to practice every day ready to go. They love the game and it shows every time they get on the field.”

And the work ethic has produced results.

At 9 a.m. today, the Bulldogs begin a double elimination tournament at Lagoon Park in  Montgomery at the end of which is a state championship.

“This is our first appearance in a state tournament in fast pitch,” she said. The team transitioned from slow pitch softball to fast pitch in 2000.

Hawthorne said the team will face stiff competition early in the tournament – they play No. 1-ranked Sumiton Christian Academy in the first game which has four Division 1 college commitments on the roster – but the team is used to the challenge having played Class 6A schools in more than one tournament.

Senior fielder Kelsey Hall said she is confident heading into the tournament, but all players will need to be on their game.

“I’m hoping for a big win, but the young ones will need to keep filling big shoes and help us get there.”