Glenwood festival to be held Saturday 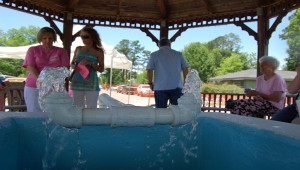 The historic flowing well in the center of town has been the focal point for Glenwood’s Festival at the Well for 21 years and has been a gathering place since the mid-1800s. The annual festival is a celebration of the well and the people it’s brought together through the generations.

One of the biggest celebrations in Crenshaw County will be held Saturday, as thousands gather in Glenwood for the 21st annual Festival at the Well.

The festival, he said, is a chance to eat home cooked food and buy handmade crafts from local vendors while enjoying live entertainment, but funds raised by the event are also used to maintain historic buildings in the Glenwood community and provide thousands of dollars in scholarships for local high school seniors.

“Last year we gave 10 $500 scholarships and this year, I think we will be giving out even more,” he said.

In fact, this year’s festival could be the biggest one yet, he said, judging by the amount of donated door prizes (more than 20) and vendors (over 40) who have reserved spots, both of which are in higher numbers than he can remember seeing previously.

He said the town’s location on the border of Crenshaw, Pike and Coffee counties brings people from all three, and even travelers from outside the area, to Glenwood for the festival. Last year, he said almost 4,000 attended.

In addition to the various vendors, festival-goers will be treated to a parade beginning the event at 9 a.m., live music from local bands, speakers, dozens of door prizes given out to ticket-holders, rides and bouncy houses for kids, a beauty pageant for girls and young boys and a street dance that will end the day at 7 p.m.

“The street dance – that’s just a party time,” he said, “and the handmade items that these folks bring to put on sale at these booths are just something to see.

Mary Sexton, secretary for the Flowing Well Foundation, which raises money for the festival, as well as the upkeep of the historic flowing well in the town’s center, said the main attraction for the day is the chance to interact with friends, family and neighbors from across the region.

“It’s all about the fellowship with people,” she said.

“We get to see people we haven’t seen since maybe last year. People come from far and near from other towns and other counties to enjoy the fellowship. It brings people together.

Holmes said those interested in reserving a vendor’s booth or a table from which to watch the street dance should call Sexton at 334-335-3426.

Tickets will be available at the gate for $5 for adults and $1 for kids.

Door prizes will be announced at intervals throughout the day.