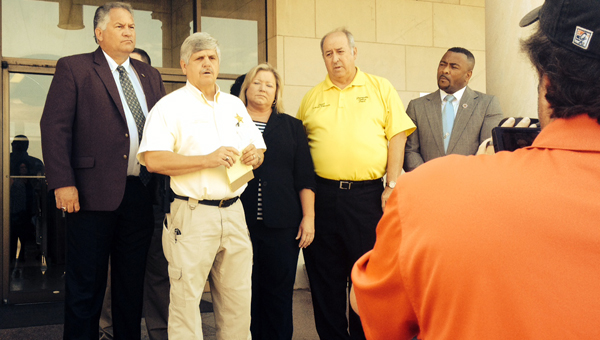 Butler County Sheriff Kenny Harden announced on Tuesday that a corrections officer with the Alabama Department of Corrections had been arrested and charged with conspiracy to traffic methamphetamine. (Advocate Staff/Andy Brown)

David Brooks, 37, of Troy, was arrested Sunday and charged with conspiracy to traffic methamphetamine. He is currently being held in the Butler County Correctional Facility on a $50,000 bond.

“We received information about a suspect that was coming to Butler County to pick up methamphetamine,” Butler County Sheriff Kenny Harden said. “With the help of the Pike County Sheriff’s Office we were able to obtain a warrant to search the suspect’s residence and we found large amounts of illegal drugs.”

Harden declined to comment on which prison Brooks worked at for the Department of Corrections, but said he had worked for the department for 15 years.

“The investigation is ongoing, so we aren’t releasing (which prison he worked at) right now,” Harden said.

Harden did say that Brooks was not selling the drugs inside the prison. Instead, he was being paid to deliver the drugs to inmates.

“He’d have a package delivered to his home and then he’d deliver it to inmates inside the prison,” Harden said.

According to authorities, the street value of the drugs found in Brooks’ home was approximately $55,000, and included a large amount of synthetic marijuana.

“This was a very substantial hit,” said Pike County Sheriff Russell Thomas. “I want to commend Sheriff Harden for the work his department did.”

Thomas said that while Brooks lived in Troy, he wasn’t known to the Pike County Sheriff’s Office.

“He’s not someone that was known to us. He wasn’t a street dealer,” Thomas said.