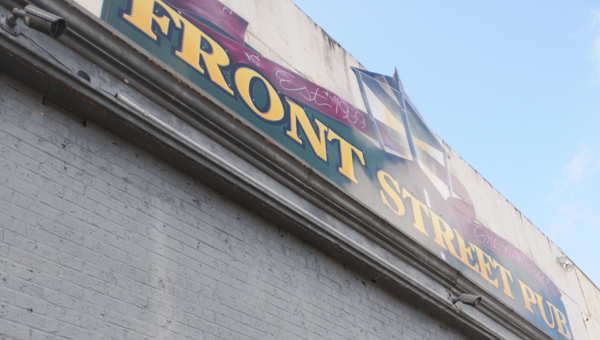 The owners of the Front Street Pub in Greenville have decided to close following a shooting early Sunday morning. (Advocate Staff/Andy Brown)

The owners of the Front Street Pub in Greenville have decided to close following a shooting early Sunday morning that left one man dead.

According to Greenville Mayor Dexter McLendon, owners Michael and Karen Jackson met with McLendon and Greenville Police Chief Lonzo Ingram Monday morning and decided to temporarily close the bar after 31-year-old Russell Gregory was shot to death in front of the bar after an altercation that started inside spilled out to the street.

The Greenville Police Department is currently searching for Marlon Herbert, 33, of Greenville, who is accused of shooting Gregory.

“As of today the (Front Street Pub) is closed,” McLendon said. “I met with the owners this morning and we came to a mutual agreement that it should be closed for the time being.”

McLendon said the bar is expected to reopen in the future.

“When something like this happens, there’s a lot of emotion — a life was lost,” McLendon said. “Myself and the Jacksons just felt it was best to take a step back.”

McLendon said the city has no plans to pull the bar’s business license and that the talk of a history of violence at the bar has been exaggerated.

According to the GPD, authorities have been called to the business five times since September.

“If we thought we were having a major problem we would do whatever we had to do to make sure everyone was safe,” McLendon said. “If that meant closing it down, we would. The police responding five times since September doesn’t justify us as a city revoking their business license.”