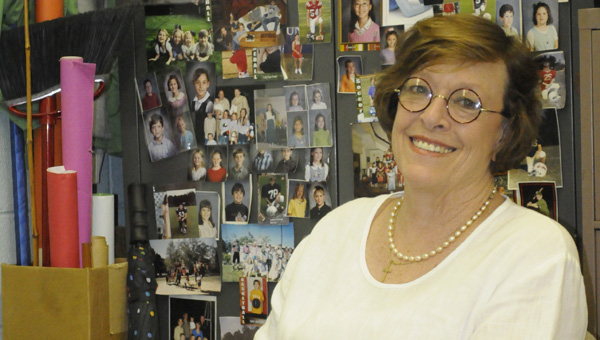 Twenty-six years worth of memories adorn the wall of Mary Dearing’s classroom in all shapes and sizes, but her infamous photo wall contains the most of all. The wall houses photos of many of her former students. (Advocate Staff/Jonathan Bryant)

Mary Dearing is retiring from teaching third grade at Fort Dale Academy after 26 years, and for all of the knowledge and wisdom that she has imparted to her students, they’ve given her something in return — eternal youth.

“I am the oldest third grader you will ever meet,” Dearing said. “There is nobody in this word easier to love than a third grader.  Absolutely, there is no age in the whole wide world that is more open to ideas, more creative — they’re wonderful.  If we were all eight and nine-year-olds, we would solve the world’s problems.”

It isn’t hyperbole or bias that when Dearing says that third graders are the best students.

It’s because she has nearly taught them all, with the exception of first, eighth and ninth grade.

Though all 26 years of her tenure at Fort Dale Academy has been spent as a third grade teacher, the six years prior were spent teaching in Selma, Birmingham, Fairhope and Fort Deposit.

But Dearing said her teaching career didn’t really begin until she walked into her Fort Dale classroom, which has been her home ever since.

“I feel as at home in this little classroom as I feel in my living room,” Dearing said. “Fort Dale has been the most wonderful place to work because essentially they have said ‘this is what we want these children to learn; go teach them,’ and I have been allowed to do so.  Parents have been wonderfully supportive, but it’s just a good place to be.”

With retirement approaching, Dearing has had time to reflect on just how much things have changed inside and outside the walls of her classroom.

She said that the past quarter of a century has made children more aware of the world, more likely to be influenced by the things they saw on the TV and computer screen and more inquisitive than ever.

“When I started teaching third grade in 1987, there were no computers,” Dearing said.

“Now, they can hop up in that chair and burn a disc of photos or find something on the Internet that we would like to look at. That part of it is wonderful.”

But some things never change.

“They are no less or no more loving than they were 26 years ago,” Dearing said. “I think that part of a third grader does not change.”

Dearing said the feeling of being retired probably won’t set in until August, at which point she’ll probably sit on her porch and cry her eyes out.

But she’s already busy planning a different kind of itinerary.

“I’ve got grandchildren that are graduating from high school next year, and there are many things that I want to celebrate with them, and with six grandchildren, there are always places to go,” Dearing said. “And I’m going to paint and I’m going to read those books that I never have time to.  And I’m going to be in my garden Monday through Friday with my herbs and my flowers, and I can do it at 9 in the morning.”

The Fort Dale Academy staff is throwing a retirement party for Dearing on Tuesday at 3:30 p.m. The reception is open to the numerous lives she has impacted in the past 26 years.

And though the thought of a retirement celebration is a bit embarrassing to Dearing, she feels that the past 26 years were never work to begin with.

“There are tough days, but overall this is not tough,” Dearing said. “I told my husband that I could not have been in a better place, and I could not have been any luckier.  This has not been hard.  I am fortunate enough that I love what I’m doing, I have had absolutely wonderful adults around me, as well as wonderful children around me.  How can that be difficult?”