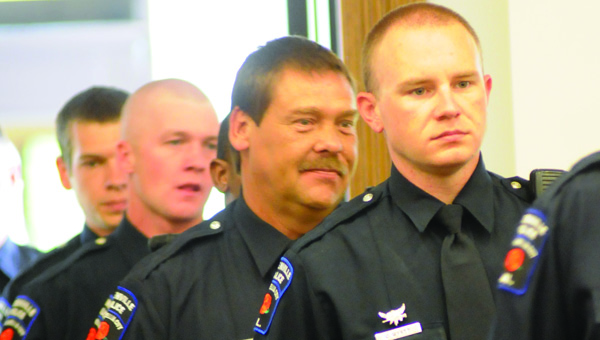 Officers file into the Wendell Mitchell Conference Center for the 2013 memorial service. This year’s service honoring the department’s fallen officers will be held Wednesday at 11 a.m. (File Photo)

The Greenville Police Department will honor its fallen officers at a memorial service on Wednesday.

Officers George Bryan, Joe Herring and Gary Heath will be remembered during the service. All three officers gave their lives in the line of duty while serving the City of Greenville.

Butler County Sheriff’s Office deputies John T. Sanders, Sr. and William Henry Barganier will also be remembered. Both gave their lives in the line of duty.

“We want to honor the memory of the officers that lost their lives serving our community, and also celebrate their lives,” Chief Lonzo Ingram said. “We have this service every year because we want to keep their memory alive.”

Along with recognizing the officers that “made the ultimate sacrifice,” the ceremony will also offer an opportunity to recognize the service of the department’s current officers, according to Ingram.

The GPD will also present its Officer of the Year award and the Gary Heath Education Award, which is presented to an officer that is pursuing higher education or additional training.

The keynote speaker for the event will be FBI Special Agent Doug Astralaga.

Astralaga was on the scene during the hostage crisis in Midland City after Jimmy Lee Dykes boarded a Dale County school bus, killed the driver and took a five-year-old boy hostage. Dykes held the boy hostage in a bunker for almost seven days before law enforcement agents entered the bunker, killed Dykes, and rescued the child hostage.

The memorial service will be held at 11 a.m. at the Wendell Mitchell Conference Center on the campus of LBW Community College. A reception will be held following the service.