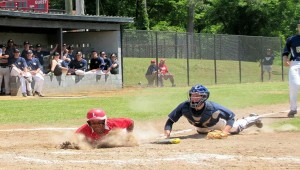 The Luverne High School Tigers will take on the Houston Academy Raiders tonight in the Class 2A semifinals, a season milestone head coach Andre Parks said has surprised fans and critics alike.

But he doesn’t think the team is content just yet.

“We appreciate the attention we’re getting, but we don’t want to have that satisfied feeling yet,” he said.

“We want to play this out and see how far it can go. We can’t be satisfied and we don’t want to let up now.”

Houston Academy, he said, is a daunting challenge.

The team has a 29-5 record and has swept all three rounds of the playoffs thus far, whereas Luverne has lost one of the three games in each round.

But if the Tigers play at the top of their game, Parks says they can win.

He says they’ve shown that already.

“Just looking back on the season, I don’t think we’re the same baseball team we were even a month ago,” he said.

“As baseball players and as young men, I’ve seen our guys grow to where they are now and that’s very satisfying as a coach.”

Sophomore pitcher Kevontae May, who gave up only five hits in Luverne’s 6-1 Game 3 victory over Mobile Christian Academy Saturday, said the win was satisfying, but he is confident it won’t be the team’s last win.

“It felt good,” he said. “There’s not many teams that make it this far. But we’ve got to have better practice this week and get the little things right.

“We may be the underdog again, but I’ve got faith in my team.”

Senior pitcher Taylor Grant said he was glad to see the team win Game 1 for the first time in the playoffs this season.

“We finally accomplished (what we set out to do),” he said.

He said he hopes to see a big Luverne crowd tonight to help push the Tigers against Houston Academy.

“They’re going to be a really good team and from the very first pitch of the game, we’re going to have to play hard,” he said.

“I think having our crowd behind us and by playing on our own field, the home field advantage will be especially important.”